After watching numerous videos and demonstrations of the various virtual reality (VR) headsets and peering through the proverbial window of the “VR store” while I was unable to experience that fun, I threw caution to the wind and dove straight into the world of VR. I bought the HTC Vive for my computer, and within two days, it arrived at my doorstep, ready to be set up. Unfortunately, my body wasn’t as ready, coming under the weather the day before with an annoying cold. Still, that didn’t stop me from eagerly waiting like a kid on Christmas Eve for the presents to show up.

One of the interesting things about VR right now is the competition between the Vive, Oculus Rift and PlayStation VR. The thinking behind my purchase of the Vive over the others was that it had an edge in terms of room-scale game play. There is also a mentality behind Steam and HTC to not buy out companies to make exclusives for the Vive. That’s something that the other two companies are doing, which can cause an already small market to be split even further. I also just moved into a new place that has a room with enough space to utilize the room-scale stuff, so why not?

Once I got my Vive, it was time for setup, which would’ve gone a lot smoother if I had known about a small problem with the sensors. The Vive has two Lighthouses that you set up on opposite corners of the room that face toward each other to track you in a full 360-degree view. I did a little bit of drilling, set up the Lighthouses and booted up the SteamVR tutorial to get started. The aforementioned problem became apparent when I faced one side of the room and my controllers lost tracking. I tried and tried to figure out the problem, but I decided to push on to see if I could play any games at all in this broken state. 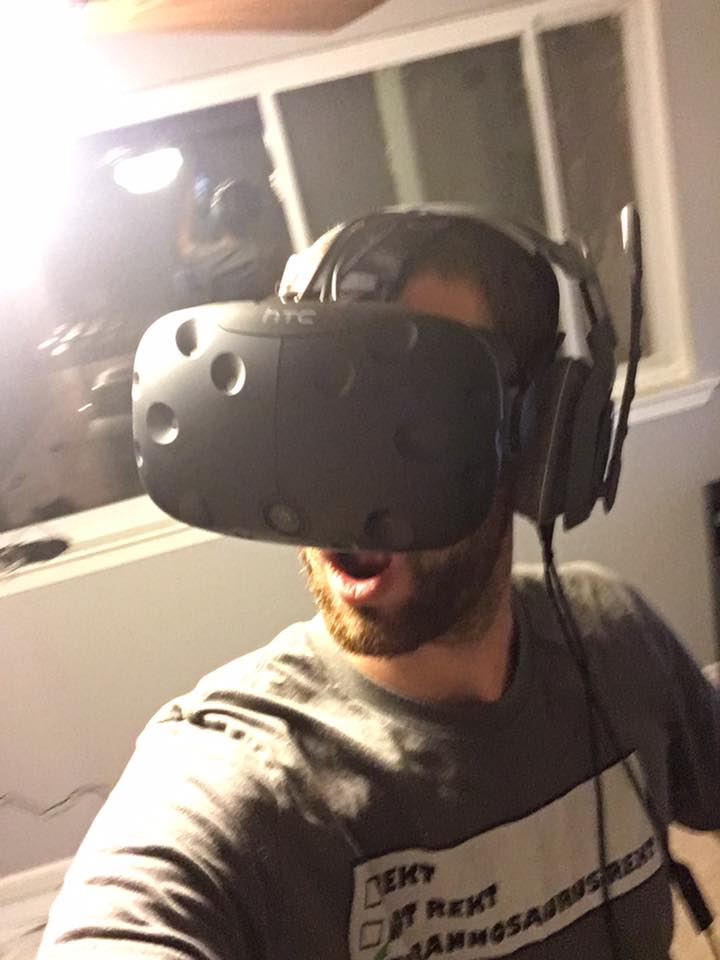 I was a bit excited until those damn windows in the background caused some problems.

I tried some of the free experiences on Steam like The Lab, Rec Room and Google Earth VR, but the tracking problem and being sick really were downers on the whole thing. Later that night, I did some Googling and discovered what could be my problem: there are no blinds or curtains in my room. Because my house was still being worked on, the blinds weren’t put up yet, and the windows were causing serious issues with the tracking. I tacked a bedsheet over my windows, and sure enough, the tracking problem was solved!

Once I got this fixed, it almost seemed like my body followed suit, and I started having an absolute blast. All the podcasts and videos that I’ve watched of people talking about how transformative VR is were a bit hyperbolic, but there was definitely something special there. The room-scale technology just works so well that it feels like the natural evolution of what motion controls were years ago. One of my gripes is that the resolution of the headset still isn’t quite there, as a “screen-door effect” is certainly apparent. The other gripe is that the games aren’t where they need to be, either, with a flood of wave shooters and short “experiences” dominating the market.

With me coming to the Vive seven months after it was released, there has been some time for a few great games to come out that I’ve been keeping my eye on. Luckily, a Steam sale was going on, so I was able to buy a bunch of great stuff for cheap. The few that stood out to me were Climbey, Space Pirate Trainer and the previously mentioned Rec Room. 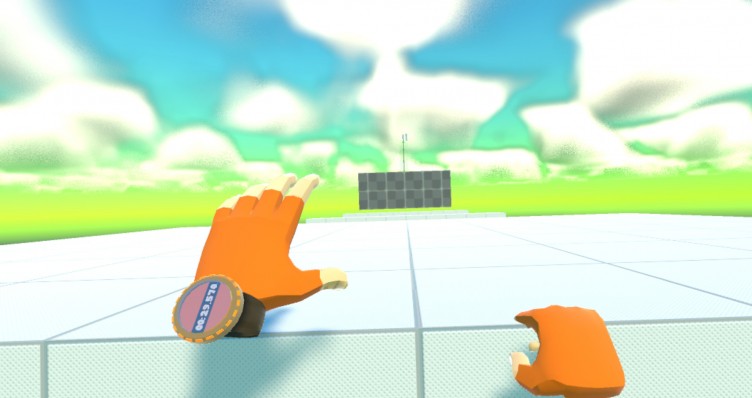 As someone with a fear of heights, Climbey certainly made my knees wobbly at times.

Climbey has been by far my favorite game so far, and it has caused me to accidentally (read: embarrassingly) break the light dome on the fan in my room. It’s a fairly simple climbing game with not much pizzazz in the graphical department, but where it shines is the awesome locomotion of climbing. You can grab on certain type of walls and ledges, and climbing is as easy as pulling yourself up hand over hand. Jumping feels intuitive as you leap from platform to platform and handhold to handhold. The multiplayer support is great as well; joining up with other people as they grunt and wheeze their way through these user-generated levels of climbing hell is loads of fun.

Space Pirate Trainer is a wave-based shooter where you’re stationed in one area and shooting robots that fly all around you. What Space Pirate Trainer does that separates it from all the others is the presentation and polish. It looks and feels like there has been some effort put in there, which can’t be said for a plethora of games on the VR market right now. It also plays like a dream as you bob and weave through bullets raining toward you in slow motion while firing back. Nothing has ever made me feel quite more badass than Space Pirate Trainer.

Finally, we come to Rec Room, a whimsical social experience where you team up with other VR enthusiasts and kinda just hang out in a locker room filled with little recreational toys. After screwing around with people, you can team up to go play some paintball, frisbee golf or my personal favorite — 3D Charades. Social games have existed for years, but because of the expensive buy-in and the unique experience of interacting with other real people in a virtual space, something really special happens. It’s something that I imagine that I’ll continue to visit, maybe on the weekends after having a couple of drinks or something like that.

Rec Room is dumb, silly fun at its finest.

As the weekend ended and the work week started back up, I began to realize what VR was going to be. It’s not this thing that I just put on my head and play for hours and hours. It’s not going to change the way that we play traditional games — at least, it won’t in its current state. What the Vive will do is give me an hour and some change every few days of a wholly unique play experience that I can’t get anywhere else in the gaming scene. I wasn’t sure how I was going to feel about VR, but after now spending a couple of weeks with it, I’m optimistic for the future as VR continues to grow and developers continue to learn how to make great games for the platform.