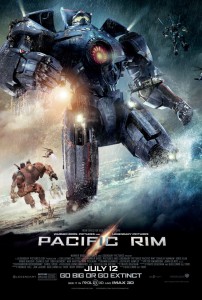 Humanity fights back against an onslaught of monstrous creatures from the deep in the new action extravaganza Pacific Rim.

Of all the talent in Hollywood, no one’s work intrigues me more than Guillermo del Toro. I certainly haven’t liked everything he’s done, but much of his work I find downright fascinating. His latest film, Pacific Rim, is a bit of an enigma. The trailers make it look like a retread of Transformers or some sort of grand Rock ‘Em Sock ‘Em Robots game. The basic premise is that Earth is suddenly under siege from below. Massive alien-like creatures called Kaiju are rising up from under the deep and devastating entire cities. Our response is to build equally massive robots called Jaegers, designed to pummel the creatures with a seemingly limitless choice of firepower.

If you’re looking for a much deeper story, then you’re missing the point of the film. Yes, there are subplots, but they’re all fairly inconsequential. This is a classic popcorn movie. Strap on the seat belt, sit back and enjoy the ride. Its 131 minutes will fly by because the action won’t stop from the first frame to the last.

Effects rule the day. You’ll be hard-pressed to find any scene that didn’t take place in front of a green screen or that wasn’t wholly created in a computer. The monsters are the size of skyscrapers and come in all different shapes and sizes. Likewise, the Jaegers come in a myriad of different models and designs that likely enthralled the entire toy manufacturing industry. They’re not only huge but sport every possible variation in weaponry and tech possible.When the two sides come together, the only thing missing is an oversize Michael Buffer to declare, “Let’s get ready to rumble!” 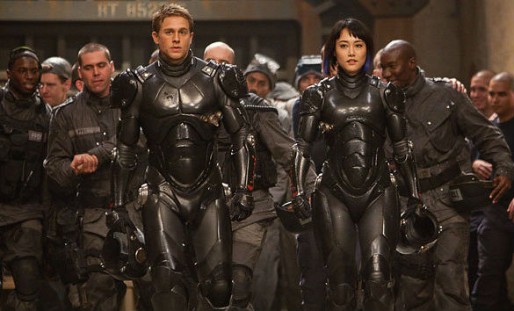 You might also be best advised to leave your thinking cap at home. It’ll only get in the way here. Just the idea that huge, human-like robots are the best design to fight such creatures is a leap just as big as the combatants. Then there’s the necessity for each of them to be run by two pilots who need to be somehow linked mentally. I’m still not at all clear on how that works or why it makes any sense. It’s also critical that both pilots be of similar mind so that they can link seamlessly to be able to operate the Jaegers as one. The pilots don’t control different elements. They both control everything at once. It’s like a giant potato sack race — with weaponry — while the Earth is under attack. Wouldn’t it be easier to just have a single pilot and forego the entire potential mismatch? There’s also a final sequence involving the plan to stop the threat for good that really tests the limits of believability. The plot is, frankly, ridiculous.

The acting, like the subplots, is unimportant. Everyone in the film is a caricature. They’re all overly dramatic and underdeveloped. More to the point is the look and feel of the film, and there it delivers. The monsters and the Jaegers are quite interesting, and the battles are, quite surprisingly, easily followed — a rarity of late when every other director seems to cheat by giving us extreme close-ups. The sound effects and score match the levels of the visual imagery perfectly.

It is far from a flawless film and will likely turn off anyone who’s looking for something more than a two-hour roller coaster ride. If, however, what you’re looking for is a current-day Godzilla story on a grander scale, then look no further. This is where the action is.