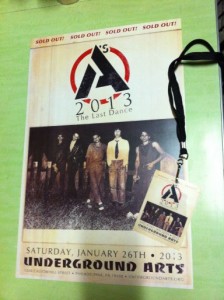 Official poster and VIP badge for the concert

Who knew that there was a time machine at the Underground Arts club on Callowhill Street in Philadelphia on January 26, 2013? As in the distant past, the hottest ticket in town this Saturday night was to see legendary Philly rock act The A’s, and we were all taken back 30+ years to the late ’70s/early ’80s when The A’s ruled the clubs and were poised to take America, too.

I have a confession to make. I have a huge bias toward The A’s. I was way too young to get into the clubs where the band played, but my late brother, rock photographer Phil Ceccola, followed these guys everywhere and snuck in his little brother to see the band that excited him the most. (Phil contributed the cover photo to the Four Dances EP.) I was into Kiss and Alice Cooper in my formative years — and still am, but The A’s were the local band that I worshipped — and still do — because they were such cool guys who never failed to entertain an audience. Their first album’s poster still hangs on my bedroom wall at home, and I quoted Johnny’s letter from “After Last Night” in my high school yearbook. The Hooters may have gotten the big break with their singles to go national, but The A’s laid the groundwork for them and should have been just as huge. Listen to any of their songs, and you’ll find that punk power pop full of harmonies and catchy lyrics and melodies that people all over should know — not just us diehards in Philly. 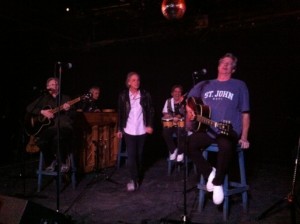 The A’s perform in the VIP-only acoustic set that featured four diverse songs.

I’ve seen The A’s many times over the years. They never failed to deliver fun, excitement and pure rock and roll abandon, but this show felt bigger, better and more exciting. Could it be because it was billed as their “Last Dance”? I certainly hope it isn’t because the concert and audience response proved that there’s still a place for The A’s. Their fans are loyal and know every word to every song, so I hope that they return in a few years or earlier when the itch gets to them again. Singer Richard Bush, guitarist Rick DiFonzo, bassist Terry Bortman, keyboardist Rocco Notte and drummer Michael “Mikey” Snyder were all smiles as they received love back from the audience in waves as hit after hit kept coming from show opener “Johnny Silent” (off A Woman’s Got the Power) to the fan favorite “After Last Night” (off The A’s). Each band member had his time to shine in the spotlight and displayed his familiar stage presence. Mikey never stops smiling as he keeps the beat, and Terry mugs for the audience as he provides backup vocals and bass lines. Rick looks confident and mischievous as he wails on that guitar and joins Terry on those background vocals. He performed his mid-song solos and riffs and just seemed to be having a blast along with the rest of the band. Rocco’s concentration on his keyboards is obvious, but he also broke out his harmonica on a couple of tracks and took over vocals and guitar on “Bopalena.” Richard’s saddle shoes were polished, and he was in good voice as he delivered his usual swagger and audience interaction. 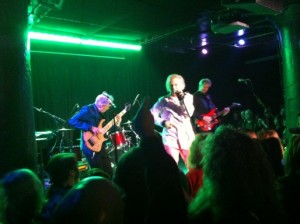 The A’s deliver the hits during their main sets at Underground Arts.

The A’s performed two sets and a few encore songs, and for those who shelled out for the VIP tickets, they performed a short acoustic set that showed the many VIP attendees that The A’s were rehearsed and ready for a fun night of rock and roll. It’s easier to list the songs that the band didn’t play than the ones they did. (See the set lists below.) They left out “Artificial Love,” “Teenage Jerk Off,” “When the Rebel Comes Home,” “Little Mistakes,” “Insomnia” (a personal favorite because of its manic energy) and regular show favorite “Batman Theme” (from the 1966 TV series). The majority of songs from their two albums and EP were mixed across those two sets in such a way to deliver surprises along with the expected hits. “Words” is a given, but “Working Man” or “5 Minutes in a Hero’s Life”? Wow! The audience went along for the entire ride from start to finish, and I was told that people flew in from as far away as Los Angeles and states like Colorado and Florida to see their favorite band. They were certainly not disappointed, and many pictures were taken with the always-approachable band members during the meet and greet before the show and out in the audience afterwards. The A’s last performed publicly with The Hooters on Thanksgiving weekend in 2007, and based on the audience reaction, including a rousing sing-along for “After Last Night,” it’s clear that it would be a disservice to the fans and their own musical legacy to rule out any future shows. They finished their encore with “The Last Time” by the Stones, and maybe there’s a clue with a wink in the following lyrics: “Maybe the last time I don’t know. Oh no. Oh no.”