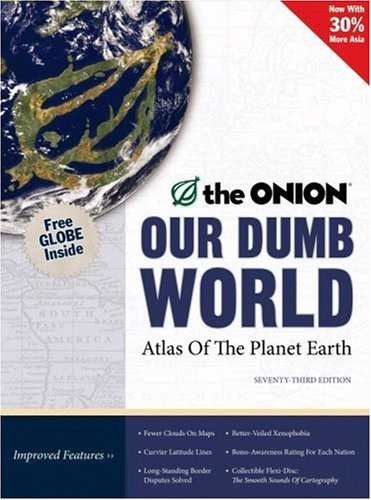 For those in your family with a genuinely good sense of humor, that includes being open to some racy and extremely politically incorrect commentary, pick up “Our Dumb World: The Onion’s Atlas of the Planet Earth, 73rd Edition”.

The is, in my view, the second real stand-alone book from the parody experts over at “The Onion“. The first book, “Our Dumb Century” is a classic in my view and, to be frank, I didn’t think they really had the ability to even remotely come close to matching it for sheer hilarity. That book pretended that their paper had been around for all of the 20th century and presented us covers and snippets of the greatest stories of the era, as they (ahem) covered them. I would honestly say it’s one of the funniest books I’ve ever read and I’ve read a lot of funny books. However, once I finished it I was certain it would be the last truly funny and original book I’d see from them. In fact, when I first ran into this book on their website I didn’t think it could possibly be all that funny. I ordered it essentially on the hope that it might turn out to be a tenth as funny as the “Century” book. Then it showed up and I realized I had another gem in my hands.

The hilarity starts from the very front cover and never lets up. It is, of course, not the 73rd edition but is the first such endeavor but that won’t stop these guys from keeping up the facade. The cover boasts, “Now with 30% more Asia” and lists among the improved features, “Fewer Clouds On Maps”. It even continues the jokes right into the photo credits and index at the back of the book. Every page is filled with incredibly funny tidbits about the countries of our world. The United States, of course, gets a dominate number of pages covering not just the country but each area of the nation down to a snippet on each state. North Carolina’s entry informs us that the state is 100% committed to getting its citizens to stop smoking but insists that in order to do so it must first get them all to start.

Even simple things like the couple of pages explaining how to use the Atlas are filled with jokes. There’s a great narrative directed to “Barnes and Noble Browsers” telling them, in no uncertain, and entirely colorful words, to put the book down or pay for it. 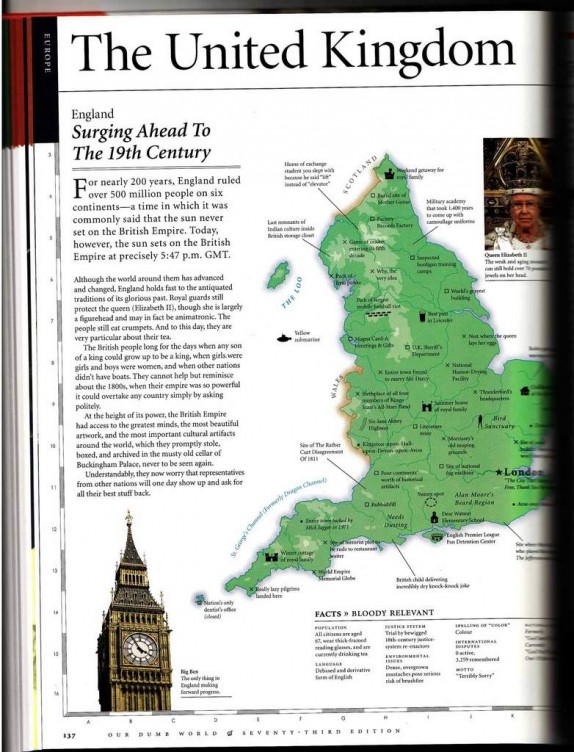 There are wonderfully funny “facts” listed about most countries. A couple favorites include Canada’s worst hockey team being called the Expos. They were so bad that they managed to play hockey on grass with some sort of round puck. In the US there’s a great entry about the Wright Brothers that goes something like, “1902 – The Wright Brothers, Orville, Wilbur, Samuel, Michael, Jonathon, William and Taylor embark on the first of many tragic test flights.” Belgium informs us in its history that they managed to slow the advance of the Nazis during World War II by using a military strategy known as “dying in large piles”. South Africa notes that it experiences a serious crime every 17 minutes but that this can’t be verified as their watches are stolen every 12 minutes.

Another personal favorite section is the small snippets given for commenting on flags of the countries. France’s, at the right, says something to the effect that their flag is conveniently designed to allow for tearing off of the left and right thirds in the event of an emergency surrender. I’d love to tell you about the people of Wales but even I think this blog isn’t quite up to handling that level of racy language (but boy is it a gut-buster).

I initially was worried that I’d get about 10 pages of intermittently funny snippets and instead every single page has delivered the goods. I’ve read it to countless laughing friends and taken it with me to group events only to see it being fought over around the room. It’s not for everyone but it is a treasure for those of you with the type of personality that love this sort of thing. It can be had online or at virtually any bookstore between $20-$30 for approximately 250 pages in a nice hard cover tome of joviality. I can’t wait to finish it just to proudly place it on the living room coffee table.