While religion’s a hot topic for just about everyone, it hasn’t cast what others would see as a large shadow on my own life. However, that’s not quite the full story. In fact, I do feel that I have a religion and have come to call myself a Saganist. Of course I’ve also found that explaining this to others comes with several hurdles including the obvious one of people being certain I just told them that I’m a “Satanist” which would be something entirely different.

Thankfully I’m not a Satanist, so then what is a Saganist? Well, first you need to know that I don’t have any sort of pre-determined dislike for organized religions. That said, I have grown cynical of quite a few of them based on my own experiences, world history, and the nightly news reports of their various actions. For me it’s really been a case of not finding the right fit. God has always had a role to play in my life, even if I couldn’t really put a “face” to what God means to me, or what shape such a power takes on. 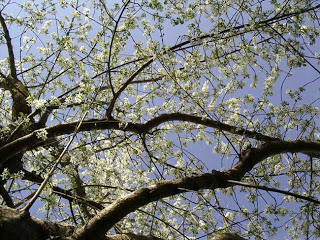 In my youth there was a park up the road and I would spend hours laying at the base of a tree looking up through its leaves, into the sky, and think about the universe and how it all must work. Over time I got to the point where I could just look up and realize there was a God. I could look into a child’s face and see God. I could look at a stream and see God. I could see God in a thunderstorm. I could smell God on a snowy mountain. Where I couldn’t see God was in a house fire, or a car wreck, or more importantly, in a prayer.

This left me with quite a problem. When I would research various religions each one would ultimately fall short in my mind. Most often it would be drenched in dogma and require leaps of faith that I simply was not prepared to make. What’s more is that each of these religions demanded that I see God in everything — good and bad. The latter struck me as a bit of a cop-out to be quite honest. The phrase, “God works in mysterious ways” has never seemed genuine to me. It simply seemed a way for people to defuse blame where either blame could not clearly be placed, or where it didn’t want to be.

So that left me in a continual state of flux. I couldn’t find something that fit, and those who had claimed to find it would often try to hit me with the faith argument. Then I came upon the works of Carl Sagan. 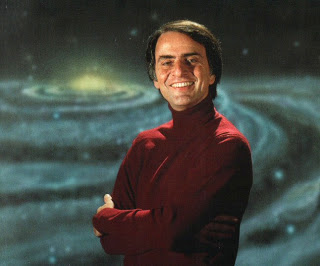 For those too young to remember, Carl Sagan was a noted astronomer. In his days astronomers were pretty quiet people. They did research and pretty much avoided the spotlight. Sagan was quite different. He had a unique passion for astronomy, and wanted to share his love with the rest of the world, and set out to do just that. What really set Sagan apart was that even though his dialogue could betray a clearly brilliant and complex mind, he was able to articulate his wonder of the universe to any layman he encountered. He would show up on the old Tonight Show and mesmerize audiences with his discussion of the stars, and the worlds beyond our own. He also could plant a seed of curiosity in others, and get them to think about the universe in new ways, or, at the least, for the first time. 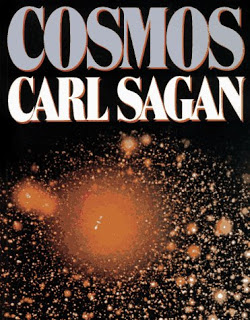 Then came his most noted achievement — Cosmos. Cosmos was a TV series that appeared on PBS stations and simply exploded in popularity. That’s quite an achievement for any show let alone one that appears on PBS. I, of course, was an ardent fan of the show.

Then came more shows and books from Sagan, and along the way he touched on a subject that is quite taboo to scientists — religion. Scientists are often among the first to eschew religion, and yet, Sagan would make the case that science and religion are not enemies and need not be mutually exclusive.

He finally won me over in one of his books when he went on at great length to explain his own theories on religion. He pointed out that, in his view, it seemed quite hard to discount a higher power when it came to the universe we live in — that it couldn’t all have just popped into existence with such incredible balance and complexity. He once said, “The idea that God is an oversized white male with a flowing beard, who sits in the sky and tallies the fall of every sparrow is ludicrous. But if by ‘God,’ one means the set of physical laws that govern the universe, then clearly there is such a God.” This would open the door, and then he’d qualify it with statements like, “This God is emotionally unsatisfying… it does not make much sense to pray to the law of gravity.” 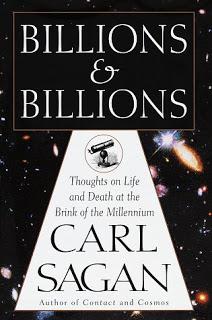 However, he also went much further by explaining that, to him, there always seemed to be a higher power at play in the universe. Where he would draw the line is in our role in the whole experience. He felt that ours represented just a tiny fraction of the whole. He believed that it is simply ridiculous to suggest that our meager capabilities could allow us to comprehend, even remotely, the plans behind such a force. In fact, he would say that anyone claiming to have the ultimate answer and path toward enlightenment was doing so out of nothing more than arrogance. In this belief I became a convert.

It has always struck me that people want to be seen as having a central role in the workings of the universe. It is, in my view, a weakness of humanity that we must cast ourselves in the leading roles of this monumental story. To me it seems quite clear, that whatever shape God inhabits, that it’s beyond our comprehension to even begin to contemplate the variables involved. It’s not only beyond our capabilities to conceive of them, but also best to simply state that we have no idea, admit it to one another, and just move on in our mutual wonder of the whole puzzle that is life.

It’s for this, and other writings and acceptances on my part, that I began to think of myself as a Saganist. I found it interesting that, at a family outing one day with my father, I mentioned this perspective only to find that he too had come to the same conclusion for himself. He said that he’d come to think of Sagan as his own personal Pope. Sadly, to this day, we seem to be the only two stated converts to this unofficial “religion”. Frankly, that’s fine. It works for me, and until such time as I find a better path, Saganism is one road I can follow willingly. It doesn’t demand that I attend a service, donate to a cause, sing, dance, genuflect or anything of the sort. It doesn’t require a major leap of faith. The only calling it makes to me is to recognize that I’m experiencing it — that I am lucky to have even the smallest of roles at the very end of the longest list of credits conceivable. And in that I find contentment.