I was just reading a piece on Huffington Post about 15 of the stranger interview questions of late from top companies. I’ve had a reputation for being one of those people who does exactly this when I interview people. Most of the positions I’ve hired for demand creativity so I’ve found that the interview needs to be creative as well. You’re not looking for monkeys who know how to memorize responses in these roles. 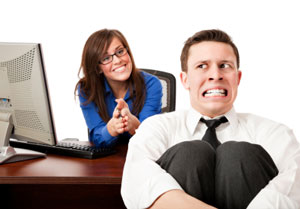 The questions are all pretty typical to me but several people I shared them with thought they were curious. A few I had no idea about.

1. “If you were shrunk to the size of a pencil and put in a blender, how would you get out?”

This one is a typical “think outside the box” question. Simply showing any gears moving in your head is the right answer. It’s entire purpose is to get you off-guard to see if you’ll say the worst thing which is, “I don’t know.” Heck, tell them you’d teleport out of there with your microscopic teleportation unit that you built from random bits of bread and jelly. Me? I’d rock back-and-forth until the blender tipped over. It’s thick glass so it won’t break.

2. “What is the philosophy of Martial Arts?”

This was for a sales associate question and seems like a bad question. I don’t know the answer and there clearly is an answer but eliminating great candidates with a clear trivia question isn’t a good idea in my book.

3. “Explain to me what has happened in this country during the last 10 years.”

This is very much like question #1. They just want to see that you’re alive and can expound on a topic and how much detail you can offer. I’d start by saying, “You mean politically, philosophically, technically, medically or generally?” Broad is good here.

This is one of those questions that you can’t possibly know the right answer to beforehand. Either they want “weird” people or they don’t. You can’t know so the best option is to ask them to define “weird” and then give them the number. Look for a clue. Do they make weird sound positive or negative?

5. “How many basketballs can you fit in this room?”

If this was for an engineering job I’d get it but it was for a “People Analyst” position at Google. I think I’d try the humor approach. “Me? Well I could fit 3,212 basketballs in this room but average humans could only fit 1,730 in here.” Remember that they didn’t say anything about them being inflated.

6. “Out of 25 horses, pick the fastest 3 horses. In each race, only 5 horses can run at the same time. What is the minimum number of races required?”

This is one I still don’t get. The bits of this simply don’t seem to go together to me.

7. “Given the numbers 1 to 1000, what is the minimum numbers guesses needed to find a specific number if you are given the hint ‘higher’ or ‘lower” for each guess you make.”

This seems like a classic trick question to me. My first response is “1”. The minimum number of guesses to find one number is 1. Am I wrong?

We don’t know the cost of a pear and we don’t have enough information to go on. I can guess 30 cents as a pear fits nicely between an apple and an orange. They might as well have asked how much a calculator costs.

9. “There are three boxes, one contains only apples, one contains only oranges, and one contains both apples and oranges. The boxes have been incorrectly labeled such that no label identifies the actual contents of the box it labels. Opening just one box, and without looking in the box, you take out one piece of fruit. By looking at the fruit, how can you immediately label all of the boxes correctly?”

This is one that intrigued me the most. It seems to have a “right” answer. The problem, of course, is the mixed fruit box. Anyone know the correct answer here?

10. “How many traffic lights in Manhattan?”

How many sluts in your past? (I’m not interested in working for Argus)

12. “Why do you think only a small percentage of the population makes over $150K?”

Ah, sales job interviews…. Just think greed and ego and you’ll be fine. “Because most people are sheep and I have great shears.”

13. “How many bottles of beer are drank in the city over the week.”

Another gotcha question. You either have a clue or you don’t and since this is for a research analyst position at Nielson it’s going to matter.

This was for a job at a bank so it’s back to question 1. Show them you can think for yourself. “First they have to prove themselves by working their way up through the system. Then they get a sponsor who takes their case to the capo. Then, after lots of hard work they’re called into a meeting with the boss where they’re accepted in.”

15. “What would you do if you just inherited a pizzeria from you uncle?”

I love this one. It just screams humor. How about, “Call my aunt and offer my condolences”?