A curious by-product of aging is that cultural references that were once common in your life suddenly become less so with each passing decade. You invoke the reference only to be surrounded by a lot of blank stares. My favorite example of this involved my trying to describe a couple I know and said, “They’re simple people — very much like Ozzie and Harriet.” After a moment of awkward silence one friend said, “I think you mean Ozzy and Sharon.” For those unfamiliar with either reference, Ozzie and Harriet Nelson had a beloved TV show that ran from 1952 to 1966. They were quintessential examples of a simpler time. Hard-rocking, drug-addled Ozzy Osbourne and his wife Sharon are about as far from that world as it’s possible to be.

Another similar reference came to mind that seems worth mentioning. I recently kept thinking of this individual and found that no one around me remembered him. The person who’s name kept cropping up was Jim Fixx. Even his Wikipedia entry lacks proper perspective and includes several contradictions of fact. 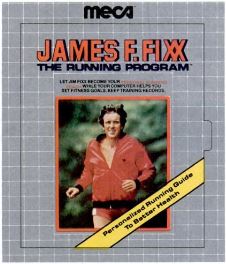 Jim Fixx was a marathon runner through the 1970’s and into the 80’s. His story was meteoric in every sense. He shot onto the national scene in 1977 with the publication of, The Complete Book of Running. It dominated book stores for several years and made Fixx a mainstay on all the various talk shows of the day. By the 1980’s it was nearly impossible to avoid references to him. He’d written several books, had videos out and had just started to revolutionize the fledgling software market with several popular products.

Jim Fixx was the face of fitness and how you can transform yourself at any point. He ran 10 miles every day — unheard of then. He didn’t start running until his mid-30’s, was overweight, smoked heavily and yet here was this guy who turned it all upside-down to go from total obscurity to national superstar. Fixx created the fitness revolution. Before him there were people like Jack LaLanne and others, but no one that reached so many, so deeply, so quickly. After his success people all started re-thinking their lives. Gym’s started popping up all over and, unlike today, virtually none existed before that point. A gym was a place where you’d find old-time boxers hanging out in a run-down area of a city. Just look at the first Rocky film for a typical example of what I’m talking about.

Suddenly everyone wanted to be in shape and to share in Jim Fixx’s dream. We all wanted to get “Fixxed”. People all over America started running. No one ran before that unless you were some kind of athlete. Then, out of nowhere, people were running everywhere. Fashions changed. Gym clothes became popular. Nike skyrocketed to success as a direct result. Being fit was in.

Then, on July 20th, 1984, everything changed in an instant. The news headlines read, Jim Fixx Dead From Heart Attack. Worse, Fixx died just after his morning run — at age 52! Everyone everywhere stopped to ask if all this fitness craze was a good thing. If Jim Fixx could drop dead from a heart attack given his conditioning and experience what about them?

Stories flooded the press about the perils of fitness. His book sales dried up. His software products were literally pulled from the shelves out of fear of litigation. People stopped running. Gym memberships plummeted and gyms started failing.

Over time we learned that Fixx had several factors against him. He had a family history of heart trouble, had an enlarged heart himself, a stressful life and a really poor health history prior to his running. Jim Fixx could have died long before he did and could have done other things to prolong his life, but didn’t. It took years for the impact to wear off.

What surprises me the most about his story is how quickly Jim Fixx appeared, how fully he changed the world, and then how quickly he was lost to time.