You ever have one of those odd moments, or series of related events, in life that you don’t ever really get the back story to but you wonder—all the same—what the heck was going on? You know it’s too small to really bother looking into but you still want to know? I had one of those this summer that is just plain curious.

I live in a typical suburban neighborhood that has a main single street that all the neighbors enter and exit the development from. At the end of that first street you come to a “T” intersection (where you need to either turn left or right when entering the neighborhood). It’s a smaller development but given the single point of access this corner will often have someone coming or going. 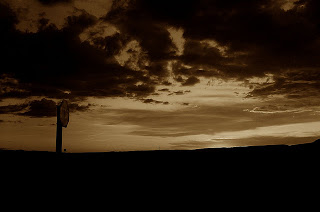 I’ve lived here for over a decade and there’s never been any signage on the corner other than the street name signs. One day, on the way home, I noticed that suddenly there was this brand new yield sign at the corner. I figured, “Eh, why not?”

So, then, about a week later I’m driving home and the yield sign is gone. Instead, in it’s place, is a new stop sign. What’s more is it looked rather cutting-edge for a stop sign. It seemed to be made of something other than metal and was entirely glittery in its reflective nature. I thought about it for just a moment and the thought that ran through my head was, “Best of luck with that.” You see, no one ever actually stops at that corner. They slow down and sort of just roll through it. So there it sat and then I see drivers, for the next several days, slamming on their brakes and reacting entirely chaotically to the sign.

A few days later I’m driving home and the stop sign’s gone but the yield sign’s back. Huh? What the heck happened? Did someone complain?

So, lastly, several weeks later it dawns on me while moving through the corner that there’s now no sign there other than the street name sign that’s always been there and I don’t recall how long it’s been since it’s been that way.

My current theory is that someone in the neighborhood has young kids or, more like my neighbors, a cherished dog and they’re incensed that drivers would drive so casually at this corner. Perhaps it bothered them so much that they went out and bought their own signs hoping to effect a change but police, seeing the signs and knowing they don’t belong there, removed them? That’s the best I’ve got.

I wish I had the back story but I also don’t care enough to really find out.