Back in 2005 I decided it was time to join several of my peers and to give LASIK eye surgery a shot. Those I knew that had it done all had exceptional experiences including at Kremer Eye Center, the place I’d decided to go with.

I also decided to pay a premium for the service that included lifetime support in case anything needed to be corrected beyond the initial procedure. That cost nearly doubled the final bill and I wondered if I’d regret it later.

I got the procedure and almost immediately my results differed from the results of my friends. They could see things I couldn’t even remotely see. Kremer kept asking me to be patient but as the weeks turned into months it became clear that I was one of the “5%” that it hadn’t worked well on. I ended up with pretty heavily impacted vision. I’d have double and triple vision. My vision would change dramatically within a day from okay to horrible and back again. Anything bright was a mess. White text on a black background looked worst of all. Not only was it in triplicate but it was also surrounded by a haze. Night vision was a real complication.

Over time I adjusted and talked with Kremer about adjustments to fix it but they balked saying that newer experience showed that going back in wasn’t worth it due to a higher risk of infection. That bugged me as I then wondered what I paid extra for. I decided to wait.

Over the intervening years I adjusted to my new lesser vision. Skiing was more problematic as I couldn’t see the minor details in the all-white terrain below me and I believe it may have even contributed to my breaking a leg later. Also, as the years past my vision grew more fuzzy with age. The only plus seemed to be that I staved off reading glasses while everyone else my age seemed to need them. 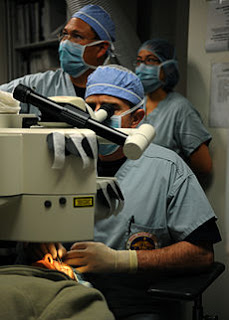 Then back around Halloween I decided to go stop in at Kremer once again to see if time had changed anything. They ran a full battery of tests and told me I did now have an option—PRK or Photorefractive Keratectomy. This differs from LASIK in that in LASIK procedures the main work is done below the surface of the eye while in PRK it’s done without having to cut the eye to make a flap and happens on the surface. The down side is a longer recovery period lasting several days to several weeks.

They also warned me that doing this would pretty much mean I’d be forced into reading glasses. At this point I figured I’d already beaten the odds so I really had no issues with that. They then advised me to just try the weaker eye first, my left, and that might result in my being able to avoid reading glasses. The odds there sounded about 50/50.

Earlier this month I gave it a go and went for it. The experience itself was very similar to LASIK except for the part that caused me the biggest trouble. The cutting of the flap puts a lot of pressure on the eye and that caused a fight-or-flight reaction in me the first time around. In this procedure no such process takes place so it’s almost painless to go through initially.

They eye is then covered with a medical contact lens to help the area heal evenly and to help keep scar tissue to an absolute minimum. The patient will need to wear that lens 24 hours a day for 3 days to a week or more. In my case I had the procedure on a Friday and the contact was removed on the following Monday. It’s a good thing too as the contact lens was driving me crazy by Monday.

Another major difference between the two procedures is that almost immediately after LASIK you notice vastly improved vision. I did too but assumed the anomalies would abate after healing (but didn’t). With PRK your eye is, in effect, injured and has to heal. During the interim your vision gets quite bad. Everything was foggy in my left eye and stayed that way for almost a week. Then, slowly but surely things improved. I’m now 10 days out and things are dramatically improved—though not perfect.

My distance vision is much improved and better than before but I still have some double-vision in the left eye  that I don’t get the impression is going to improve. I also still need to wait a while for things to settle as the difference between my left and right eyes has now caused the right side to feel worse than before. Reading is also a real exercise as one eye can’t see anything and the other can. At the local pharmacy today I tried on a weak pair a standard reading glasses and things instantly improved. Sounds like I might not have avoided that part.

My biggest concern was that the bad vision underneath the lens would combine with the adjustment above and create an even worse situation. That doesn’t seem to be the case but I also have come to accept that my vision will never be as good as it was with plain old glasses. If I could go back to them I would. Now it’s just a matter of hoping for the best with what I have. Thankfully, for now, things are better than they’ve been since 2005.