A few months ago I saw the film Forks Over Knives and it was the final straw in a long thought process I’d been having about my diet. I’ve been a die-hard meat and potatoes kind of guy. Always have been. I support vegetarians, vegans or the diet anyone wants to partake in. That’s up to them. For me it’s always seemed plainly obvious that we’re carnivores going way back. However, over time I started getting this nagging feeling that my diet wasn’t helping me. I’ve been very active at the gym but still I wasn’t feeling the way I thought I should. I also seemed to have a rather elongated list of growing medical concerns that also might have either been directly related or at least exacerbated by my diet.

I started researching and along the way saw several diet-related films including Food, Inc, Supersize Me, Tapped, Fat, Sick and Nearly Dead and others. Each was interesting but none of them really connected with me until Forks Over Knives. It was full of some very useful data along with the typical anecdotal evidence but it also just felt like it fit me. 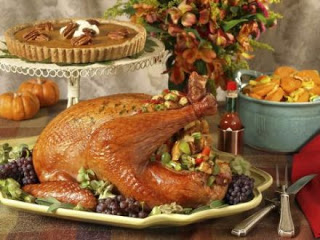 Right then and there I decided that I’d move to drastically cut back all types of meat save for seafood (I figured I’d see how I felt about fish and such at some later date). It’s all been working out great. As I mentioned before I haven’t missed meat at all and then Thanksgiving started to loom large. I’m the leg eater in my family. Most people don’t want them and that seemed like easy pickings for me for something I like anyway. This year I figured I’d be facing a very hard dilemma.

Instead it turns out that Thanksgiving without turkey was Thanksgiving. The only major difference was that everyone was complimenting me on how much better I look with some being downright shocked at the difference and others asking all sorts of questions about the reasons, the impact, the hardships, etc.

When it came to the meal I found a rather funny thing happened. While sitting there with my plate full of “side dishes” it occurred to me that virtually every year I lamented the fact that I’d become so full that I really couldn’t enjoy a good portion of the foods that were served up. Not this year. I tried everything and even had just enough room to eat some really plump grapes. I tried sweet potatoes for the first time at Thanksgiving—still didn’t like them much but they’re growing on me. I ate this special creamed corn. I had a load of asparagus, a pile of fresh cranberry sauce, a dollop of mashed potatoes, a nice helping of cole slaw, green beans and, surprisingly quite a bit more.

I didn’t miss the turkey even a little. I looked at the carcass with the two untouched legs on it and thought to myself, “They didn’t do you much good to save your life so perhaps the same is true for me.” Silly thought I know but it was still fun to contemplate. In the end I was still a bit waited down when a family member sauntered over and offered an interesting insight. He said, “You can really see the difference in you. Every single year you collapse after a short period and end up sound asleep in a chair but this year you’re full of energy.” And it was true. I’d been looking for signs along those lines but I’d been a bit too close to it to be sure and this really drove home the point more than anything else.

I’m thankful to be here and to be in good health—perhaps better health than at any dinner in a long, long time. Thank you.