The following story involves a rather fascinating (to me) repair job that I’m quite impressed that I could do and that’s both easy and inexpensive. 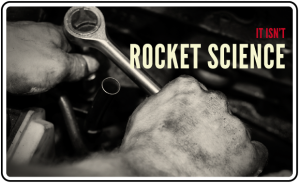 I’m still driving a an older Chrysler Town & Country van that I’m hoping to keep going for a bit until my son moves out and we move into new digs. I won’t need a van then–or several extra bedrooms. Anyway, about a year ago I stuck my key in the ignition and it wouldn’t turn. It wasn’t the issue we’ve all had where the wheel is turned too far. I fiddled with it and ultimately it would work. This annoyance kept up for about a week so I sprayed WD-40 into the opening where the key goes and, presto, the problem vanished. That is, it vanished until this week and no amount of WD-40 helped.

I pushed my luck several times on trips with the van sometimes having to wiggle the key for minutes before it would turn. Luckily, when it finally gave out for good, the van was in my driveway. That’s very lucky.

However, I couldn’t start it and with the cold weather I worried about the battery dying if I couldn’t fix it right away. I called my mechanic (who’s pretty reasonable and honest) and he said I might have to tow it in and that the repair could cost up to $500. I looked online and found similar estimates all over. 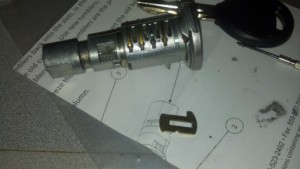 The original ignition cylinder above (next to key) and one of the original tumblers (gold item at lower center).

During my search I also tripped over a few very useful postings that changed everything for the better. The first one—and it was very odd—said that I could get by in the short term by keeping a rubber mallet handy and tapping the key once or twice before turning it. Would you believe that worked—beautifully?

I also found a post pointing me to a video on how easy this job can be and another post pointing me to replacement parts. The down side was pretty annoying. I’d have to take some covers off around my steering wheel, buy and replace the ignition cylinder and, in the end, I’d have a new set of keys for the ignition but still have to use my old keys for the doors and rear hatch.

Another post mentioned that I could take everything into a locksmith and he’d set up the new cylinder to use my old keys. That, however, could end up costing as much as the repair estimate.

Thankfully, as I was looking for replacement cylinders when I noticed one with a bunch of odd “parts” in the picture. Reading more closely, a part from a company called Dorman Products claimed it would not only replace my old cylinder but match it to the existing keys. It didn’t hurt that it was also cheaper than the other parts I was looking at. I ordered it.

Yesterday I disassembled the necessary parts on the car to make the repair go faster. Today the part arrived along with detailed instructions.

You first have to remove your old ignition cylinder and that’s fairly easy. You then hold down a detent post and turn the key and the center portion slides out of an external cover. You then see several notches on the top and bottom. It turns out these are the “tumblers” we’ve all heard about. 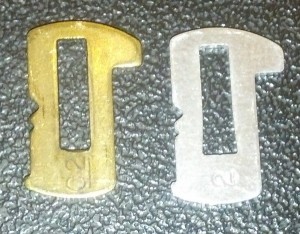 An old (left) and new (right) tumbler. This was one of the most legible of the old tumblers.

You then carefully remove each one with a screwdriver (I found it easier to use needle-nose pliers). Once removed you look closely at it where you’ll notice it has a number stamped into it. There are eight such tumblers and each one can be stamped with a number from one to four. In my case the original tumblers also included the letter C. Thus the possibilities would be C1, C2, C3 or C4. You then write down this number on a sheet they provide. The sheet has a large version of a key printed on it with eight boxes corresponding to the location of the tumbler on the cylinder. Once you jot down all eight numbers you disassemble the new unit and replace its tumblers with other tumblers (the set they send includes five of each number plus whatever comes in the new cylinder). You just need to make sure you put the right numbered tumbler into the right slot.

When you’re done, like magic, the new cylinder accepts your old keys.

The whole experience felt a bit like a puzzle and like cracking a safe. The print on the old tumblers was tiny and worn making them very hard to see. I had to take pictures of each one with my phone and then zoom in to read them. I also managed to put the bottom tumblers in the top and the top ones in the bottom (four on each side) and, of course, that won’t work. If you manage to do that, when you try to re-insert the core of the cylinder back into its outer sleeve, it won’t go.

I didn’t realize this at first and tried to force the pieces together. When I gave up I pulled the two ends apart and didn’t realize the detents (two small “poles”) are just sitting in holes with a spring below them. These four tiny pieces all came flying out and shot onto my floor. I spent the next 20 minutes looking for each one and I never found one of the tiny springs (about half the size and width of a ballpoint pen spring). Thankfully the parts match the old parts perfectly so I just used one of the old springs.

Once I swapped the upside-down mess I’d created, the whole thing worked great in the house so, I went outside to put it all back. On the way to the van I felt a pebble in my shoe and took it off. Out popped the tiny spring. What were the odds of that? It hit my pants, rolled down the leg and straight into my right sneaker. Amazing!

Anyway, I put the new cylinder in and it worked great. The entire job, even with mistakes, took me about an hour for a total investment of $60 including $15 in overnight shipping charges.

The experience did leave me with a couple thoughts. First, I realized that eight tumblers each with four numbers means a possible 65,000 combinations for keys. Second, since this is so mechanical in nature, now that I have my combination can I use the number to get a master key made that isn’t worn down from use? I also wonder if anyone can use the two keys that came with the replacement cylinder but are keyed to a different combination.

All in all I found the entire experience to be interesting, compelling and effective.