So last night I’m watching TV and I decide to check all three cable news networks to see what each one is saying about the health care reform situation. Of course the most fun was watching Fox News. At the time I checked in Glenn Beck was on and I’m more assured at every viewing and hearing that this guy is off his rocker entirely.

I will say this directly. If you listen to, or watch this guy, and he makes sense to you, then you’ve got some major issues. 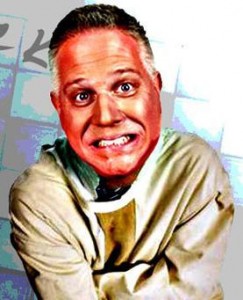 Last night for 10 minutes he went on a rant about how the left resorted to outlandish rhetoric by calling the House vote historic and using a picture of Nancy Pelosi with some antique gavel to go with the sentiment. He kept showing the picture and going off on everyone calling this situation historic. Is it historic? Maybe. Maybe not. We’re all pretty used to everything be ramped up in moments of elation especially when it comes to politics and the press.

To drive home exactly what I’m talking about Beck takes this argument of ridiculous rhetoric and then one-ups it by then saying it is historic in the same way Pearl Harbor was historic and the Hindenburg was historic and Neville Chamberlain meeting Adolf Hitler and saying Hitler was an okay guy was historic. Way to make your point Glenn.

So then on the drive into work this morning I hear Beck on his radio show talking about the bill again. He’s flipping out and says this balanced and totally non-rhetorical comment, “Don’t they get that now Cass Sunstein is the most dangerous person in America?”

The most dangerous person in America? Wow. Is this guy on the loose? Is he an arms dealer? Oh, wait, he’s just a professor who is now the administrator of the White House Office of Information and Regulatory Affairs. Who woulda guessed? Everyone knows how dangerous those bastards are. Every single war we’ve ever waged is a direct result of the will of the administrator of the Office of Information and Regulatory Affairs…. in Glenn Beck’s nightmares.

So in this man’s mind it’s unacceptable rhetoric to call the passage of this bill historic but totally okay to call someone virtually no one has heard of from an office even less people have heard of the most dangerous person in America? Okay Glenn.