On February 21, 2009 an 11 year-old boy took a shotgun, put it to the back of the head of his father’s pregnant fiancée, and pulled the trigger killing her. 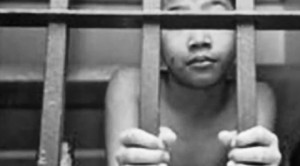 The details of the case are about as gruesome as they come. The child was apparently jealous of all the attention she was getting and the impending newborn would have likely only made the situation worse in his mind.

Since this happened in Pennsylvania the law makes it clear that he needs to be tried as an adult and the maximum sentence is life in prison without the possibility of parole.

This was being talked about on the radio pretty heavily yesterday and, frankly, I was disgusted by the callers calling in to share their viewpoints. The vast majority were in complete support of this with several calling for the child’s death.

These callers seemed immune to any discourse feeling that such a crime deserves no leeway and that he’s lucky Pennsylvania doesn’t have the death penalty.

Much of the back-and-forth had to do with the crime itself, his intent and his actions before and after. What was entirely missing in every discussion I heard seemed to be the most basic of all points.

The reality is that all of our laws are designed to be a deterrent against those who might break the law. The problem here is that an 11 year-old boy cannot possibly be accounted for in this assessment, simply because no 11 year-old boy can be depended upon to understand the true value of life. It’s one thing when a 20 year-old kills another person. The killer should absolutely know, by that point, what the value of life is, and if they don’t, then something else is very wrong.

Expecting an 11 year-old—a child that hadn’t even reached puberty yet—to understand the real sanctity of life and the value he was taking away is just not realistic. This child had no idea what it’s like to have a child, to lose a child, to lose a parent, to experience romance, to know what life is all about. Yet it’s this same child many are willing to lock up behind bars (or execute if they had the option) for many decades deserving anything that goes with the sentence.

Many callers pointed out that the child had been an experienced turkey hunter and thus he knew what taking a life meant. To me I see it just the opposite way. A child being raised to hunt and kill animals would be far more likely to become desensitized to the value of life.

I’m not suggesting that the child should be set free. Clearly this is a disturbed little boy and he needs to be put behind bars for quite some time. He needs serious mental analysis and attention and maybe it’s a few decades or more before he does understand the impact of his actions and the value that he took away but that’s better than simply throwing him into a cell to rot for 80 years for something he couldn’t possibly understand the true meaning of.