17 contestants gathered in the heart of Ohio to take part in the first official debate of the 2016 Presidential campaign.

This first event included some controversy of its own. The oversized field was broken into two groups. The top 10 would take the stage in prime time on the Fox News Channel. The lower seven would also debate on the same stage, but without live coverage and to a much smaller audience. The selection of the top 10 is the curious part. Fox previously stated that the 10 would be determined by the average results of several major national polls. However, when it actually came time to announce the results, they suddenly changed gears, dropping one of the polls from consideration, employing a highly dubious excuse. The new criteria swapped the rankings of Ohio Governor Tom Kasich (now in) and former Governor Rick Perry (now out). It’s impossible to think that Fox wouldn’t recognize the ratings benefit of having Ohio’s own Governor in the main field.

That slight hiccup aside, the group of 10 emerged from backstage at 8:50pm EST and took to their respective podiums. They were:

The gloves came off in the very first interaction. Baier started by asking a question clearly aimed at Trump. He asked the field to raise their hand if they could not promise to support any of the other candidates for President if they themselves weren’t chosen as the nominee. Trump alone raised his hand, drawing an initial cheer that was quickly buried under an avalanche of boos.

The next two hours included several dramatic moments, some great questioning and some surprising insights. The night’s best moment came near the very end of the event from Huckabee. His closing statement was a brilliant bit of wordplay seemingly aimed at ridiculing Trump, but actually revealing its true target — presumptive Democratic nominee Hillary Clinton.

The evening’s lowest point was delivered by the most obvious messenger (Trump). He openly and unnecessarily insulted moderator Kelly for taking Trump to task on a clear misstatement that he claimed was meant for Rosie O’Donnell. Kelly took it like a pro.

The event was also rife with countless snippets constructed and practiced over many long hours well in advance of the debate. One such exchange took place between Christie and Paul. Christie pounded Paul for his “establishment” response, and Paul responded by invoking the much-maligned Obama hug. The pundits loved it. 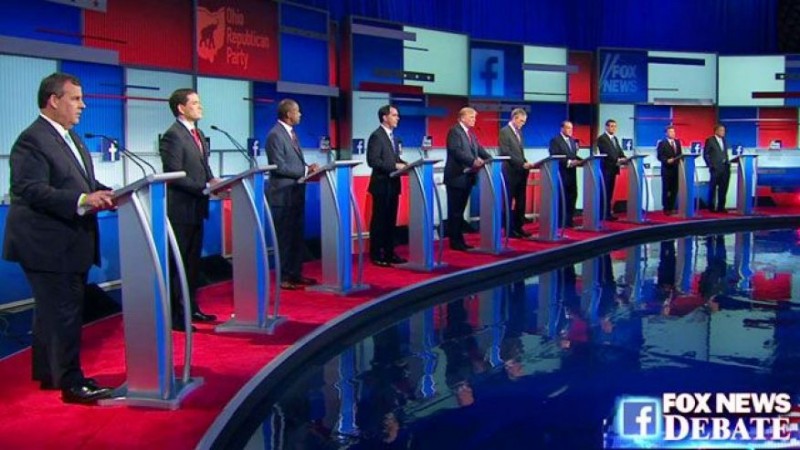 So how’d everyone do?

For me, the clear winner of the debate was Rubio. He evokes a genuine passion that’s hard to ignore. The only time that he faltered was during his closing statement. He is a candidate who needs to avoid delivering memorized speeches. He’s never better than when he seems to just be winging it. As soon as he goes for the prepared material, all the life seems to drain out of him.

The biggest loser of the night was Carson. Yes, he told a great joke during his highly-practiced (and still awkwardly delivered) final statement, but he came off looking like a towel boy surrounded by heavyweight champs in every other exchange. The other candidates looked on with pained expressions or mock agreement for comments that they knew were coming from an opponent with no chance of success.

The most surprising candidate was Trump. All the man had to do was to show up, look like a leader and toss a bone or two to his followers and reap the rewards. Instead, he appeared to devolve in front of our eyes. He looked every bit like an out-of-touch, bitter, callous and pompous jerk at every turn. None of his responses provided any substance. He even tried to employ the “Hey, don’t blame me because I’m not the only crook here” attack plan. If this doesn’t cost him in the polls, then we’re all in big trouble.

Bush didn’t lose any ground, but he certainly didn’t seem to gain any, either. He’s clearly playing the tortoise in it for the long race.

Walker was played by a human-sized, pull-string doll blurting out one talking point after another.

Huckabee was Huckabee. His allure begins and ends with the evangelical vote. Nothing about the evening changed that.

Christie looked like a bohemian at the opera. He had every right to be there, but he just didn’t seem to mesh with his surroundings.

Paul won the yo-yo award. Every single high was offset by an equally memorable low. His attempts to bring Trump down were as effective as spitballs in a tank battle.

Cruz never showed up. In his place was the doll that the Walker team rejected at the last minute. It regurgitated a litany of questionable pomposity not seen since the days of the robber barons.

Kasich nearly pulled it off. He started off with carefully measured responses that lacked any charisma before finally realizing that it was an hour after his bedtime. Perhaps lost in a haze of fatigue, the real Kasich emerged — a genuinely likable, highly engaging leader.

As for the moderators, Kelly owned the night. Her questioning was razor sharp from start to finish. Wallace did a solid job as well. However, Baier seemed as overmatched as Carson. Kelly and Wallace evoke an intellectual approach. Baier counters with white teeth.

Much to my complete surprise, the proceeding was enlightening, engrossing and absolutely entertaining.