So, as I noted, one of my initial thoughts after hearing of the death of Osama bin Laden was how Sean Hannity would manage to twist the news into a big negative for President Obama. I could just see him turning over in his sleep trying to work out the degree to which he’d have to bend. 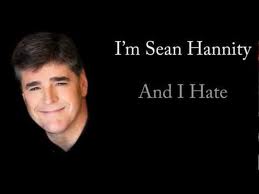 On Monday his show felt a bit disjointed. He didn’t seem to know where to go. By Tuesday it all changed.

Like most evening news pundit shows his is often broken into five segments.

Part 1. Hannity has on former Secretary of Defense Donald Rumsfeld. The entire session is a discussion on how none of this would be possible if not for the diligence of President Bush and his administration. Rumsfeld, of course, agreed with virtually everything. There’s much discussion about water-boarding but both are careful not to actually state that water-boarding got us the info we needed. Instead they note that the sources that are said to have given up the courier that led to bin Laden had been water-boarded. That’s not the same thing as having given up the courier as a result of water-boarding and that case is already being made by those involved in the interrogations.

Part 2. Senator Lindsey Graham comes on to rail about the Muslim funeral service given to bin Laden and how it’s a clear example of political correctness going too far. The right totally misses the point on this. It’s not about respect for bin Laden. It’s about showing respect for the Muslim faith as a whole (for which we’ve pretty much dug our own hole over the years). It’s also to show that America rises above even in times of trouble and high emotions. To do any less would lessen us all. Graham tries to make the point that his concern is about national security and not political correctness. I can’t think of anything more that would help national security than to have taken the path chosen. Anything else would only risk national security more.

Part 3. We get “The Great Architect” as Hannity calls Karl Rove. This segment is all about how Obama screwed up by not releasing the photos. We get lots of references to Bush deserving at least half the credit (and likely more) and that Obama will never learn that Bush was right all along. Amazing.

Part 4. A couple press guys come on to talk about the topic of the “Radical Response” which is supposed to be about how the rest of the fundamental Muslim world will view this but instead turns into a collection of rehashing everything already covered.

Part 5. Hannity’s “Great American Panel” which includes no one from the Left and which essentially just repeats Part 4 but in greater length as there’s no need to bother with the distraction of this segment supposedly being about something else.

Typical. I’m just surprised he couldn’t manage to pull this off on Monday’s show.