Today on Rush Limbaugh‘s radio show he spent some time deriding President Barack Obama over, as usual, just about anything the man does, ever has done and ever will do. There’s nothing new in that for Mr. Limbaugh. During one segment he spoke about how Obama doesn’t understand the concept of American Exceptionalism.

He points out that America is a great nation because, while we are no different in our DNA from those of other nations, our government design provides us with the means and freedom to achieve in ways not seen outside of America.

You know what? For the most part I agree with Rush on this. There is a great benefit to being born in America. Our system has provided us with a foundation that allows us to create and prosper that seems to dwarf similar efforts in other governments. 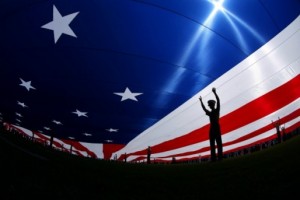 Where Mr. Limbaugh and I diverge—and I suspect it’s the same point for many others who share my view—is that this advantage is not perpetual. It is not something that just happens as a by-product of calling your nation “America”. Contrary to Rush’s claims the real value of this exceptional-ism only really started paying dividends in the 20th century. We weren’t a world power until after World War I. We didn’t become one of the top world powers until well into World War II. Thus, the benefits of this choice of government took 160-170 years to take hold and has only been operating at full speed for about 65 years.

Rush Limbaugh would have you believe that our nation started excreting golden eggs 30 seconds after the Declaration of Independence was signed. Perhaps we should remind him that our country was marred by slavery over the next century along with a myriad of other inequalities that cast a very dark shadow over any concept of exceptional behavior.

Just because our system of government provided a windfall unique in all the world to a generation or two does not guarantee that the wheel will keep on turning this way. I firmly believe Rush Limbaugh is doing far more harm than good in the goal of keeping this dream alive. By telling everyone that we’re in the midst of it now denies the basic facts of reality. It’s my view that we are living on our past deeds at this point. China owns a huge chunk of our country now. You have top Ivy League students going there to teach English because the only jobs here for them tend to involve malls or fast food chains. Where a generation or two ago, you could read about our top status across countless metrics, we now read about our lagging behind, in nearly all of them.

We’re becoming a fatter, sloth-like populace, that works more hours and gets less from it than the generation before us. We have to worry about health care. We have to worry about pensions vanishing. We have to worry about things our older family members could take for granted. In my youth America dominated nearly every market. We made the best of everything. We provided the best steel. We produced the best cars. We created the best technology. Now we make almost nothing except pharmaceuticals. Yep. We’re great at creating Viagra and Zoloft. That really fits our “can’t be bothered to get off the couch” populace. I wonder what my grandfather would have thought of my trying to explain Restless Leg Syndrome to him?

It’s clear to me that Mr. Limbaugh feels compelled to tell his listeners that we are still #1 in every way. To do otherwise would be to admit that he missed the large ringing bell extolling the end of our exceptional-ism. It started eroding, in my view, during the 1980’s as a direct result of the Me, Me, Me attitude that President Ronald Reagan ushered in, unchecked and unhindered, by the pundits of the day.

The fact is that we still have the advantages of our system but that it’s in our best interest to realize that the golden age of that benefit is now behind us and slipping away. I completely believe that we can get it back but not if everyone around us continues to act as if we haven’t lost a step after all this time and that the only danger to it is in the form of our current President. Acting like a bunch of football fans with large foam #1 hands isn’t going to address the problem and it’s time the Limbaugh’s, and their fans, recognize it.