It seems that at least once every day, and often several times a day, Sean Hannity offers up a litany of anecdotes and “facts” about Ronald Reagan. The key point to these references seems to be to re-imagine the former President. Getting listeners to view Reagan as the perfect conservative model seems to be a major endeavor for Hannity. Among the endless comments one comes up far more often than any other—”Ronald Reagan cut taxes and ushered in the greatest period of peacetime economic growth and prosperity.”

Phew, that’s a heck of a mouthful. He says it so often and it sounds so good that I decided I just had to have a look at the numbers myself. I’ve found over time that if Sean Hannity invokes Reagan there’s about a 100% chance that something he’s saying is completely erroneous (which is just slightly higher than his typical percentage for everything else).

Okay, so looking for historical GDP data (which is considered the defacto stat for measuring economic growth) I find that numbers are hard to come by prior to 1947. I’ve been told by several sources that GDP crashed in 1929 with the Great Depression and, almost without exception, has increased every year since. I’d love to see the numbers going back all the way to the birth of our nation as having just 60+ years of data seems a bit thin but let’s take a look all the same.

So, to the numbers.

Let’s look at some comparisons: 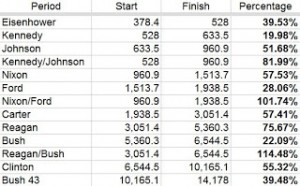 Here we can see some interesting numbers. We can see that Ronald Reagan, at least for the period of limited data easily available, had the highest GDP percentage growth of any one president since Harry Truman. However, Reagan benefits a bit here by having been elected to two terms and since GDP generally goes up (much like everything else) simply being in office longer has a benefit.

Consider that Jimmy Carter, whom Hannity views as one of the worst Presidents in our nation’s history, had a 57.41% increase in GDP during his one single term. This is a period we’re told time and again was a complete economic disaster and yet GDP marched right along at near-record levels. Hmmm.

Then consider political parties. While John F. Kennedy‘s numbers were among the worst Lyndon Johnson‘s slightly more than single term combined with Kennedy gives you an 81.99% increase for the same 8-year period as Reagan. However, that’s accounted for here with the rather conveniently, if awkwardly noted disclaimer of the word, “peacetime”. Johnson “benefits” from GDP increases during a war. This clarifier is tossed in even though the economy benefits and it doesn’t care why. I’m left to believe it’s mentioned only to remove this troubling entry from consideration.

Take a look at another 8-year period, this time Richard Nixon and Gerald Ford. Even with what most people would recall as a horrible economic environment under Ford we experience a 101.74% increase in GDP. Doesn’t that make that period sound incredible? However, we have to toss it out too because Vietnam was still going on so that doesn’t count.

Bill Clinton doesn’t measure up either and yet I was pretty sure things felt rather solid economically during his tenure. Maybe my memory is just that bad.

It all looks great for Reagan so far. We’ll just ignore, in proven Hannity fashion, that his entire hypothesis is flawed. He credits Reagan’s tax cuts for this number when that single year of tax cuts was followed by several years of huge tax increases to offset the spiraling markets and unemployment that actually followed those initial cuts.

The other interesting part in all this is that these are raw GDP numbers that are unmodified for inflation. This just ignores inflation’s part in the equation entirely which is a bit like walking underwater and ignoring the need for oxygen.

It’s one thing to increase GDP but if inflation is rampant then that’s certainly going to have a major impact on its ability to impact Hannity’s “prosperity” bit. In fact, the adjusted numbers it turns out, are referred to as “Real GDP”. You can read up on GDP here. Real GDP is what every economist is trained to look at.

How does Reagan fare when that’s factored into the equation?

Adjusted for inflation we see: 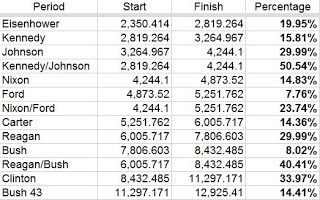 The first thing I notice is Lyndon Johnson at 29.99% but darn that pesky conflict in Southeast Asia screwing up his chances….

Then I notice something very telling. Look at the numbers for President Ford. The economic reality we actually experienced comes through loud and clear with GDP limping forward at just 7.76%. Quite a contrast to the rosy results of the unadjusted (and quite unrealistic) numbers.

Right after Ford I can’t help but notice that our Superman from the previous chart, Jimmy Carter, suddenly is very Clark Kent-like which, again, more realistically matches the history.

I also notice that the foundering economy that cost George H.W. Bush his job suddenly appears.

Then we get to Reagan who matches Lyndon Johnson at 29.99% but without the benefit of a war. That’s certainly noteworthy and it still keeps Hannity on the path to correctness.

That is until we get a few lines down to conservative arch-nemesis Bill Clinton with 33.97%. Here again we see a number that matches rather amazingly to the actual history of the day.

I then found some numbers about historical economic expansion here and it shows that the longest period of such growth was from March, 1991 to March, 2001—a period of 120 months.

So that pretty much leaves me right where I thought I’d find myself with regard to this Hannity line…. In order to make it work you’ve got to first come up with a bunch of asterisks and then you’ve got to ignore the obvious which he knows his audience will either gladly or ignorantly do and finally you need to ignore anything that happened after Reagan left office.

I did notice one other item on the last spreadsheet. Reagan and Bush as a combination turn in a stunning 40.41%. Oh, but drat that Gulf War makes it all invalid. Can you imagine what Bush’s numbers would have been like if he hadn’t been so helped out by the Gulf War? George W. Bush had two of them and two full terms to his credit and still came in at 14.41% but I’m sure that was all Bill Clinton’s fault in some convoluted way.