An altercation happened near the White House between Bill O’Reilly and an Occupy protester who approached him while Bill was on his way to the White House. Word of it got out so O’Reilly opened his TV show with his version of what happened. You can get the video for yourself on several sites including FoxNation or Media Matters (I include the Media Matters link as those on Fox tend to disappear). This clip includes two full segments but you only need to see the first part for the context:

Bill takes a couple minutes to explain his version of the story. In it he describes an “out of control” protester that ran up to him and his assistant, screaming and how he had no choice but to defend himself from this crazed anarchist with the only means he had (due to lax Washington laws according to O’Reilly) with his umbrella. As an example of how bad things are he played a clip of protesters disrupting a Chris Christie speech with coordinated shouts from the back. He closed by saying that had the guy identified himself everything would have been different and re-emphasizing that running at someone in the dark screaming is a threatening situation.

The interesting part is that he never bothered to show the video of the event:

Watch the video. Almost nothing of what O’Reilly described to his audience is portrayed here. First of all, the person approaching O’Reilly does not appear to be running. Nor does he appear to be screaming. Nor do we ever see any hint of the assistant O’Reilly claims to have been helping to protect while the altercation is taking place. He also seems anything but startled. After several totally quiet steps O’Reilly clearly takes his umbrella and purposely reaches outward several feet to poke the protester and to continue to push him away with it. O’Reilly says, “Oh, hey, sorry about that” as if it was entirely an accident. 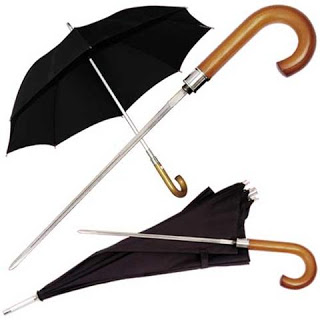 In O’Reilly’s version of events he used every possible tactic to spin a complete and utter lie about what transpired. He sets the tone by using the words “runs up”, “screaming”, “startled”, “armed”, “out of control”. He makes it sound like a crazed lunatic was descending upon him while he had to heroically defend the life of his assistant and himself from potential harm. None of it happened and the fact that O’Reilly declined to play the actual video of the situation speaks volumes. The only people who would side with O’Reilly here are those who are inherently fearful of people in general—and that makes up a pretty good chunk of extreme Republicans. He said, “I was lucky last night. I’m sure the guy wanted me to hit him.” HE was lucky? The only physical contact that occurred here was by Bill O’Reilly towards the protester.

O’Reilly goes on to explain that, just as he predicted on previous shows, bad things were going to happen because the protesters are becoming increasingly aggressive. In other words, he did nothing here. They’re aggressive now and they attacked him. This from the guy that sends producers out all over the country doing the exact same thing to countless others. The amazing part about this hypocrisy is that he then spends then entire second segment asking why there isn’t a law against the very thing he’s guilty of.

It’s also quite disturbing that he got a former detective to come on to corroborate his view and to go so far as to say, of a video they dismiss as edited, that it clearly shows the protester running up behind O’Reilly and yelling out questions. Again they try to suggest that all of this would have been different if the protester stated his name before proceeding. Yeah, right. None of this would have occurred if it started with, “Mr. O’Reilly, I’m Branden Lane. Did you just come from the Newt Gingrich fund raiser?” The detective even calls O’Reilly a victim.

Most disgusting is that later he equated his experience with that of John Lennon. “I’m thinking of John Lennon here. Poor John Lennon is signing an autograph and all of a sudden he is dead.”

O’Reilly says, “I don’t want the guy arrested. That would have made me look like a bully and an idiot.”