This morning I caught this interesting article and thought it worth sharing and commenting on. 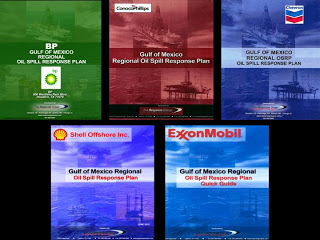 The article and the included picture point out that all of the major oil companies doing offshore drilling each have nearly identical Gulf of Mexico spill response plans. Look closely at these covers from five “independent” oil companies. Yes they’re each different colors but take a closer look. Even the graphics used on them are nearly identical.

More interesting is the wording of the documents in that they include many of the same commentary. I’m not saying they use similar phrasing. I’m saying in large segments it’s word-for-word. They mention protecting the walrus which doesn’t even exist in the Gulf. Three of the plans reference the same phone number for the same expert who’s been dead for five years.

This reality is extremely telling. It shows rather bluntly how much interest and effort these companies have invested in safety. They care so much about it that they couldn’t take the time to do their own work.

My response to this would be to respond to all of BP‘s requests for leniency with a typical form letter. “Dear Recipient, We’re sorry to hear that you’re experiencing difficulties. Please visit www.whitehouse.gov and submit your issue to the appropriate department using the forms provided…..”