Over the past decade, B 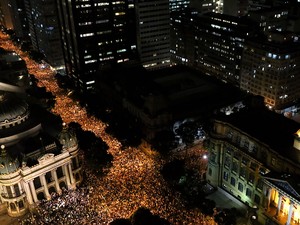 razil has been the subject of little else but success stories in the international media. Never mind the beaches, beautiful women and carnaval; the stories coming out of the South American giant were of economic growth, millions leaving poverty to enter the middle-class and reduced inequality, which is why the mass protests that erupted in mid-June caught everyone by surprise, leaving many outsiders to wonder just what the hell Brazilians are complaining about.

The answer, as it turns out, is everything. The movement sparked by a 20-cent hike in bus fares has now evolved to include wide sectors of society from the rich to the very poor, mobilizing millions of people across the entire country. Grievances span from the extremely specific (expensive public transportation) to the very broad (government corruption and incompetence). 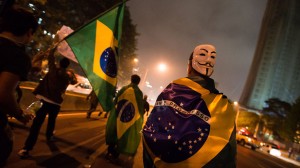 The truth is that Brazilians have a lot to complain about. Yes, GDP per capita has nearly tripled since 2000, and around 35 million people have been lifted from poverty. However, while Brazil’s economy has made great progress, its political system and institutions have not. If anything, they have regressed. Corruption is as rampant as ever, and crucial government services like health care and education — supposedly public and accessible to all under the Brazilian constitution — are of extremely poor quality or virtually nonexistent in certain areas. Even in Rio de Janeiro and Sao Paulo, the country’s largest urban centers, public hospitals grossly lack the staff, beds and medical supplies to keep up with demand. People dying while standing in line or in a crowded waiting room is not unheard of. In many of Brazil’s more remote rural areas, access to the already poor quality government health care can be many hours away.

The same goes for education. Brazil has now the sixth-largest economy in the world, yet its education system ranks among the lowest. A recent study by the Organization for Economic Co-operation and Development ranked Brazilian students 53rd out of 65 countries, behind significantly poorer nations like Mexico, Turkey and Trinidad and Tobago. Much like the deficient health care system, schools lack the teachers, facilities and materials to provide students with a decent education. The average Brazilian has completed 7.3 years of schooling, and 8.6 percent of the population is illiterate. Yet Brazil invests 5 percent of its GDP in education, about the same portion as countries like Spain, Germany and Japan, leaving many to wonder where all that money is going. The problem is not in a lack of resources but in poor management and governance.

The all-encompassing cause for all these shortcomings is corruption. It is widespread, not limited to a specific party or branch of government. Scandals from the municipal all the way to the federal level occur on a weekly basis, so common that they hardly make the front page of newspapers. The vast majority of the time, perpetrators act with impunity.

The bus-fare hike, mixed with reckless spending in preparation for the 2014 World Cup, proved a tipping point. Being charged extra for extremely poor quality transportation while billions were being spent on stadiums was the last straw for millions of Brazilians, who overcame their usual apathy and took to the streets. Corruption was expected in preparation for the World Cup, with a 2012 poll showing that 85 percent of Brazilians believed World Cup-related corruption to be inevitable. Spending has surpassed even the most pessimistic estimates, however, with a total cost to taxpayers sitting around R$28 billion Reais (around $14 billion dollars) and counting, three times as much as South Africa’s edition in 2010. The promise that Brazilians would enjoy an enduring legacy, with improved urban mobility and infrastructure, has not materialized. Instead, the country is left with 12 brand new stadiums, some of which will hardly be used after the tournament is over.

The recent uproar signals that, as millions have left poverty, Brazilians have grown to expect more from their government. Some of the most popular protest posters demand “FIFA standard” hospitals and schools, alluding to the soccer governing body’s requirement that stadiums be world class. 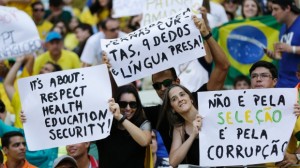 What will happen next is uncertain. The movement is broad with no clear leadership. The most immediate impact might be seen in next year’s presidential election when President Dilma Roussef will seek a second term. She remains the front runner, but her approval numbers have dropped 28 points in a matter of months. Whether the demonstrations will fizzle out or result in long-term substantive reforms, however, remains to be seen.