To my ear there’s now little doubt that the Operation Wall Street initiative has the entire conservative media flummoxed. They not only have no idea what to make of it, but in typical fashion, fear what they don’t understand and are doing everything in their power to ridicule and diminish it at every turn. 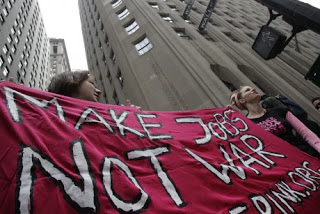 This morning on the always reliably phobic Dom Giordano radio show he played a single unflattering audio snippet of a participant and then went about equating everyone involved with any Operation Wall Street initiative as exactly the same as the snippet. The callers that followed were just as ludicrous. A dialogue ensued on exactly the issue I last wrote about—how this effort is starting to take on the underpinnings of the Vietnam-era protests. However, here in Fearland the difference is that they believe all of these protesters are carrying firearms and are out to do damage if they don’t get their way.

I have another post I’m collecting background on for later publication on the psychological concept of transference and this is a classic example of it. These fearful gun-carrying people assume everyone else with an opinion is also packing heat even when that makes little sense. Most of the participants in these events are young, Democrats and mostly in blue states or in blue cities even when in red states.

They honestly believe that the only reason people are showing up is because they have nothing better to do. The concept that these people are out of work or simply making the effort hasn’t dawned on them. Nor has it crossed their minds that virtually everything they’ve said could be more readily applied to the Tea Party protests. There’s that problem with transference again.