Last night Jon Stewart struck another blow against hypocrisy in politics in a way that simply leaves opponents standing around looking silly.

In this case the host of The Daily Show took issue with the talking points coming out of conservative circles regarding taxes and who should or shouldn’t be paying them. Fox News and other conservative outlets have adopted the perspective that raising taxes on the rich represents all-out “class warfare”. 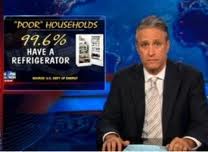 This perspective was magnified in part due to the recent editorial provided by billionaire Warren Buffett. Buffett has, once again, noted that the system is entirely out of balance. The clips covering this op-ed are funny but the best one was the last where one of the Fox guys asks, “Is he completely a socialist?” Yeah, that’s how idiotic the discourse has become.

However, Stewart was just getting started. In response to a comment about how this class warfare is what you’d expect from a third-world country Stewart points out that when it comes to income equality the United States ranks 64th just ahead of Uruguay and Jamaica and Uganda. Sounds like socialism has taken root entirely here doesn’t it? (that’s sarcasm for my conservative friends.)

Then Stewart went to the biggest hypocrisy out there—that taxing the rich doesn’t really work anyway. He plays a number of clips (of which there have been endless numbers to choose from) of conservative pundits saying that the proposal to let the Bush tax cuts expire would only raise a paltry $700 billion. The last clip is from a guest on Fox saying that this is just a fraction of the budget and not really worth the trouble.

Stewart then asks if they have the same, “Why bother” attitude about smaller spending and we then get the clips of conservatives complaining about spending that amounts to small millions of dollars but doing so as if these are huge expenditures. The final clip is from a guest saying that cutting off NPR would save a million dollars and she puts heavy emphasis on the word “million”. He points out that, when you cut it it’s a MILLION dollars but when you tax it, it’s not even worth bothering.

Then we get to the key point. The counter to taxing the rich has, of late, turned to the straw man argument on the 50% of Americans that don’t pay any income tax (though they do pay other taxes). Cue the clips of endless complaints about this including the final one from Neal Boortz (who is one of the worst advocates of this sort of attack and a total douche-bag in general) stating that the poor are simply getting a free ride in our country. Some ride.

So, the solution to our economic problem isn’t taxing the rich, it’s getting the 51% that aren’t paying in—because they simply don’t have it—to do so anyway. You see, the bottom 50% of the country controls 2.5% of the country’s wealth. Stewart then does some basic math. 2.5% equates to $1.45 trillion in everything they own. If we, just for kicks, took half of everything they own that would come to $700 billion. Stewart then wonders where it is he’s heard that figure before.

He then says, “So raising the income tax rate on the top 2% of earners would raise $700 billion dollars but taking half of everything the bottom 50% have in this country would do the same. I see the problem here. We need to take all of what the bottom 50% have.”

The piece closes with Fox clips of hosts and guest arguing about how well off the poor of the country are doing. They point out that 99.6% of the poor in America have…. wait for it…. a refrigerator, to which Stewart responds, “You food-chilling mother f***ers. How dare you.” The graphic Fox ran with this stat even has the word poor in insulting quotations as if having a refrigerator gets you a key to the executive washroom. Remember that the census data used for this defines the poor as a family of four living on just over $22,000 a year.

The piece was both hilarious and brilliant and shows the utter contempt these mouthpieces have for anyone other than themselves. I cannot believe more people don’t see through this sort of ridiculousness.