Some people are paper-thin when it comes to being able to get a sense for their morality and motives. Dick Morris, for me, is one of those people and from everything I’ve seen over the years he’s a guy I wouldn’t believe to give me the correct year let alone the correct time. 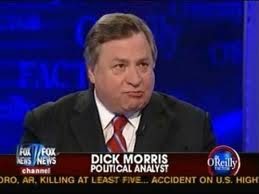 If ever you wanted to get a sense of the dishonesty that goes on at Fox News this is a great place to start. Note I’m not saying that similar things don’t go on elsewhere it’s just that I’m much more aware of it on Fox. For starters, he’s a big favorite of Sean Hannity who’s a guy who will say anything to anyone to get his agenda across. Add to this the fact that I’ve personally heard Morris make countless predictions that never come to pass and yet he keeps getting called back to make more while treated as a flawless oracle.

Another thing he does often is to say one thing to make sure he’s blowing with the pulse of the day and then, no sooner than the wind shifts, so does his entire viewpoint without ever commenting on his previous positions.

Here are two cases in point:

Initially, when he was asked about Mitt Romney as the potential Republican nominee he was absolutely clear on his stance. He told Hannity, “Well, my view is that, first I do not like Romney. It’s the only one that I really hit…..I want to be sure that the new president will repeal Obamacare. And since he enacted the equivalent of Obamacare in Massachusetts, they call it Romneycare, and I talk about how disastrous it’s been, I can’t trust him on that.”

He then told conservative radio host Mike Gallagher why he stopped making such comments, “Not because I approve of Romneycare, not because I approve of his flip-flops, flip on abortion, but because I may have to be one of those who carries this guy for a couple of months when he’s running against Obama and I don’t want to make my own task harder.”

I don’t know how anyone can take this guy even remotely seriously when he so clearly comes out and tells you that, from now on, he’s going to be lying about his views on the guy. It speaks volumes about the ulterior motives of Morris, Hannity and Fox for allowing this guy to spew this stuff that he’s admitted is garbage.

So then consider Paul Ryan. How did Morris feel about Ryan before he was selected? Well, that easy to find. He told Fox viewers, “Ryan is brilliant and exciting. But the problem is he comes with some baggage because of his earlier plan to basically replace Medicare with a voucher system.”

On Morris’ own website he had this to say about Ryan, “The problem is that he came out in the first Ryan budget for replacing Medicare with a voucher system. And he’s since backed off that. He said, No, no, you don’t need to do that. But you can keep your current Medicare or go to the voucher system and we’ll make the voucher system so attractive that most people will make that shift. But Obama’s not going to let him get away with that and it would give Obama a really big issue to beat Romney with. So even though I love Paul Ryan, I hope that Romney does not select him.”

And what about now that Paul Ryan is the selection? Well, classic Dick Morris of course. Once again on Fox he said, “Romney hit the jackpot with Paul Ryan.” Also, “So I think it’s an inspired choice.” And, “I think it clearly sets to rest any conservatives’ doubt about the intentions of Mitt Romney and clear the decks, we’ve got a fight on our hands.”

Would you take a check from this guy or believe him when he tells you it’s in the mail? We all have those people that, the moment you see them, they make your skin crawl. This is that example for me.