Last night on CNN during the Piers Morgan show Piers spoke with Rudy Giuliani who spent the entire segment doing absolutely nothing but laying down a total PR job straight out of a talking points memo.

It was disgusting to watch. The first segment was nothing but this politicizing and hypocrisy from a man who has zero credibility to speak to these issues. This is a man who, against a huge number of contrary opposition, insisted on building a command center at the very center of the biggest terrorist target in New York City and then, when the 9-11 attacks came, had no choice but to run all around the city for lack of a command center. Now he’s brought in as some sort of expert on how to prepare and react in the face of a disaster.

On the impact of Hurricane Sandy the former Mayor was typically political. Morgan pointed out that initially Giuliani commented that the New York City Marathon should go on. Then, when it became utterly clear that this was completely against the tide of opinion, he changed his mind. When Morgan asked about that change Giuliani dodged the question, “Think it was a close call. You could have gone either way.” Yeah, you managed to go both. If this is your idea of a leader then you’ve got no clue what leadership is. 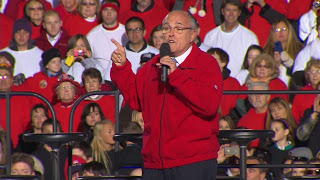 Then comes the part that’s totally orchestrated. On one side of the Republican landscape you’ve got pundits—like Giuliani—ripping the President for not paying enough attention to the ongoing trouble after the storm. Their “position” is that the President should be pitching a tent in Staten Island and moving in until the last home there gets power back. In total hypocritical fashion Giuliani’s view was that bodies are still being found so Obama should be there. That’s funny. Bodies were being pulled out of Ground Zero long after Giuliani left. I guess it’s the old, Do As I Say, Not As I Do mantra.

The catch here is in the other landscape view. Other Republican pundits are playing the other game—that is, that Obama should have never showed up at all—that it was entirely disingenuous for him to do so and that it made it appear to be nothing more than an attempt to grab headlines. Which is it people? How shall he move in without ever going?

He goes on to say that he sees the job as making sure it’s taken care of to the very end. In his view, again, this means moving in—as if the President doesn’t have the staff and power to make sure this is done without his actually having to be there. That’s called delegation and it’s what top managers do best and it’s what our government is actually designed to do—and they’re doing it.

The most telling part of the sincerity of Giuliani’s words? Just look at the picture. He’s talking about how this is all about the destruction and suggesting politics is something that should be put aside and that people need to feel you get it. Meanwhile he’s standing there talking about the carnage while wearing a bright red Mitt Romney/Paul Ryan campaign jacket. I’m sure every New Yorker that sees this feels his deep, unvarnished empathy for their plight. Can’t you just feel the tears from here?

He also tells a bald-faced lie by saying the President attempted to shift blame for Benghazi to Secretary of State Hillary Clinton. That never happened.

The most interesting part of the interview, however, was still to come. Just prior to interviewing Giuliani, Morgan had interviewed General Wesley Clark. Clark was so taken aback by Giuliani’s comments that he asked, off-camera, to be able to put a question to Giuliani.

The moment Giuliani realizes that he’s going to have to give a response you can see the look on his face. He wants nothing to do with it. Clark points out that after 9-11 Democrats didn’t move to politicize it for months and refrained from doing so until we had a fair amount of information to go on. He also pointed out, as someone who actually has real experience dealing with issues like Benghazi, that his view on this is entirely different. Granted, I give the same argument here as Clark represents Obama but at least this is someone speaking directly about something he handled personally and without botching it. Giuliani’s response, out of nowhere, is to suddenly declare that he has to go to another interview and to dodge the response entirely. He goes on to level an unrelated charge and then says, “Thank you very much“, handing the microphone off and moving off camera. Again, this is leadership?

Yeah, I know. Why do I care? Why am I surprised? Well, I’m not. I’m simply fed up. This is what’s wrong with journalism today. People like this on both sides have no business being given national time to spew their rehearsed garbage no matter who they are. If they’re not going to speak honestly then don’t give them the microphone. The same is true when you watched the debates. Why do we need to bother going into the “spin rooms” to hear advocates for candidates tell us about how they “feel” about the job their candidates did? Is there news in them saying they think their candidate did great?

What did we learn from this interview? Nothing. All that happened is Piers Morgan gave a man five-plus minutes to stir the pot more. This is not the press I grew up with. It sickens me.