If you’re like me you may have missed loony Congresswoman Michele Bachmann‘s most recent gaffe given during a speech on January 21. It contains a claim that’s so entirely, ridiculously, obviously wrong that it bears questioning how anyone could possibly support this woman any longer. The sooner she’s out of politics the better off this nation will be.

The speech was given in Iowa (Bachmann believes she just might have what it takes to make a run for the White House) and included some shocking re-inventions of history.

One gaffe is essentially an oversight where she gives a litany of reasons for why immigrants first came to America and nowhere among them does she mention avoiding religious persecution. Yeah, that would stand in stark contrast to her own actions and comments on persecuting anyone of any religion she doesn’t deem as worthy.

The more glaring comments deal with our Founding Fathers and her view of their impact on slavery. Believe it or not she actually believes, or so she states, that we were founded on racial and ethnic diversity and that it was these same founders who were responsible for abolishing slavery in America. 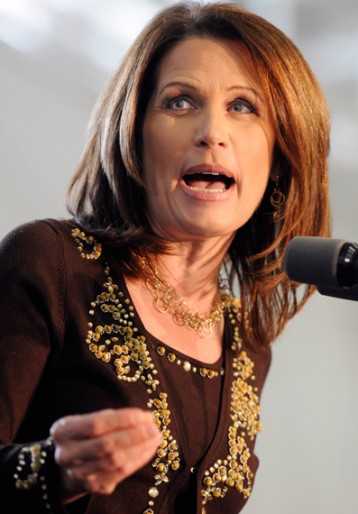 She then said of early immigrants it didn’t matter about the color of their skin, language or economic status. “Once you got here we were all the same. Isn’t that remarkable? It is absolutely remarkable.” Yeah, it’s absolutely remarkable how flat-out wrong that view is. Women came here as second-class citizens. Blacks came as three-fifths of a person and generally didn’t come of their own free will. Many of different religions couldn’t find work here.

12 of the founders, including Jefferson, Washington, Madison and Franklin owned slaves. Jefferson fathered children with one of his and there’s little doubt as to its non-consensual status. The closest she gets to accuracy is in naming John Quincy Adams as an opponent to slavery. However, he wasn’t a Founding Father and he died 15 years before the Emancipation Proclamation. I guess perhaps she thinks death didn’t actually stop the guy.

This is the women providing an unrequested unofficial response to the President’s State of the Union. Will wonders every cease?