The conservative media is up in arms about the HBO movie about Sarah Palin and the 2008 bid for the White House. The attacks are all extremely predictable: HBO is a bastion of liberal Hollywood elitists bent on the destruction of traditional American values and the indoctrination of easily-led would-be socialists. 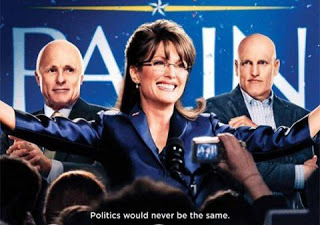 Of course 95% of what’s being said is being said by pundits who either haven’t seen or refuse to see Game Change and that’s a real shame. The facts are pretty hard to refute. The accounts contained in it were mainly provided and vetted by the very Republican operatives involved in the day-to-day events of the campaign. A major source for the material is former John McCain Senior Strategist Steve Schmidt (played in the film brilliantly by Woody Harrelson). Another major source, Nicole Wallace (a chief Palin aid) is portrayed wonderfully by Sarah Paulson. Both have been ostracized by the conservative media for their having been so open about the problems during the campaign and Schmidt specifically is discounted now as a traitor since signing on a consultant with MSNBC. Both of these sources have been very supportive of the information presented in the film and have said it captures the events accurately.

The sad part about all of this is that it’s actually a very good piece of film making. First and foremost is the work done by Julianne Moore as Palin. I would have never guessed she could even remotely pull off looking like Palin but eerily does so not only in look but in mannerisms and speech.

The right simply wants to dismiss anything produced at any time that ever says anything even remotely negative about anyone in their party. When’s the last time either side ever said anything positive about a movie or show put out about their side? I can’t recall such a time. In this case it’s a really terrible oversight. Why?

I make no bones about my dislike for Sarah Palin. However, my comments on her are available, preserved for posterity sake for all to see in this very blog. I said at the time of her being announced that it represented “a totally shocking move with all the right thinking behind it if she has the right stuff.” It was my take pretty soon thereafter than she simply didn’t. Over time I really grew to dislike the woman. The right has tried to make her out as far more than she is simply because it feels that’s the only way the game can ever be played and as long as this sort of ridiculousness continues then we have little chance of fixing anything in this country. If we cannot be completely honest about the people running, or looking to run, the country then we’re really in big trouble.

Anyway, the point is that this film has made me feel far more sympathetic toward Palin and all in a good way. Nothing that I saw came as a shocking surprise and I mean that from a realistic standpoint. The film portrays Palin as a real person with real issues that virtually any of us, thrust into this type of maelstrom, would be hard-pressed to improve upon. The entire first half of the film is complementary towards her and everyone else portrayed. Once the trouble begins (and we all can agree that trouble certainly had to have occurred) we then get to the point where the political landscape today prevents us from seeing eye-to-eye.

For me what I saw was a politician from a “smaller” state thrust into a world she was entirely unprepared to navigate. The world before that had been something she could always manage personally but this sort of stage was beyond her direct control and that’s going to frustrate anyone used to having things done a certain way—their way. None of the outbursts portrayed strike me as unrealistic or out-of-character from what I’ve seen of the woman. Again, most of us would have had similar difficulties and that’s simply because we’re not playing in those leagues and I don’t find it insulting to suggest that Palin wasn’t either. She’s a quick study and I give her credit for knowing a good thing when she sees it. Her choice to join the ticket changed her family’s fortunes forever. Running for office again would be a huge mistake that she and her family simply don’t need and, so far, she hasn’t taken the bait. There’s nothing wrong with that and there’s nothing wrong with a film showing her in that light, especially when it’s fairly obvious to most everyone that views it objectively, that these things most likely happened very closely to what’s portrayed.

The naysayers will always be there and I had my own run in with them when I commented about HBO while reading up on a conservative site I mentioned a few posts ago. Their comments were all entirely ridiculous and, of course, wrong. None of those posting thought anyone would bother to watch this. Instead, for it’s debut, it was seen by 2.1 million people giving it the highest ratings for an HBO original film since 2004.