For several years I’ve been hearing about a different type of reading experience referred to as the graphic novel. The concept of a graphic novel is that it’s a full story that’s driven by the illustrations.

Graphic novels come in several flavors but there are two major distinctions. One is referred to as “Manga” and it represents the most traditional type of graphic novel. These are read from back to front and right to left. I suspect this is because Manga mainly comes to us from Japan but I’m not 100% sure about that. I will say it’s a bit funny to adjust to at first.

The second type is the standard format. This is just like a typical book except for the illustration elements.

95% of consumers who encounter a graphic novel won’t get the point. At least that’s my guess. Why? Because to them it’s going to appear to be one large collection of comic strips or cartoons. While the genesis of this medium may have a basis in comics I believe it would be a bit insulting to many in the hobby to call them that. Don’t think of these as comics or you’re going to be in for a shock. The few that I’ve experienced so far are often filled with very adult topics and content.

Most of the Manga books I’ve encountered fit the comic book-like mold. Anyone familiar with the eastern phenomenon of “Anime” will feel right at home with Manga. The look and stories are nearly identical. Much of Manga revolves around battles and comic hero-like characters with superpowers. To be frank, it’s just not my kind of story. With few exceptions in my traditional reading I’m very much a non-fiction fan or at least things based in reality. 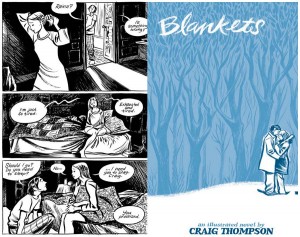 With that said, a friend loaned me a set of graphic novels to introduce me to the genre. I immediately was taken with the look of one of them. Graphic novel fans will know it immediately as it’s one of the most famous of the lot. This one is called “Blankets“. It’s written and illustrated by Craig Thompson.

The first thing that will strike you about the book is its size. I tend to be a slow reader so I told my friend not to expect it back for some time. He assured me that wouldn’t be a problem. Understand that we’re talking about a book that’s as heavy as a toaster and nearly three inches thick. I started it on a recent trip to Portland (Oregon) and had finished it before I reached my layover in Chicago — a two-hour flight.

Blankets is a stunningly moving and wonderful book. It tells the story of a character named Craig and his experiences growing up and coming of age. It’s about the wonders of youth and the perspectives of a child. It touches on the powers of creativity that all children harness as well as their struggle to break free from all things as they grow up. It also is a powerful story of first love and the influence this has on life.

In it Craig explains the relationship he had with his brother growing up. How it could go from touchingly close to sadly distant all in the blink of an eye. It conveys the complexities of how children perceive and deal with their parents and the pressure exerted on them from adults. It also touches on areas of his life that had to be difficult to come to terms with. There are moments here that will cut right to the bone with any parent that reads the retelling. Finally there’s the amazing story of first love and the emotions and strength one gains from it. All of it is told in a way that seems perfectly suited to the genre. It wouldn’t have had the same impact without the imagery and instead of the epic feeling it gives, would have come off as a quick short story.

I felt, upon finishing it, that I’d lost a good friend. I didn’t want it to end. I think of it often and always with a warm spot in my heart. I don’t think it’s a story I will ever forget. It also made me nostalgic regarding my own life experiences and this is a good feeling. It rekindles moments of tenderness and pain that shape all our lives.

I can also suggest that if you too are taken with Blankets that you shouldn’t expect most graphic novels to fall into this realm. It’d be like expecting most traditional books to be on the level of “War and Peace“. This is a masterpiece of the genre and I do hope to find others like it.