My comments on the Sandy Hook tragedy focus on two distinct issues. The first issue has to do with hypocrisy. The oft-used lament of the the gun supporter is that guns don’t kill people. People kill people. In other words it’s all about personal responsibility and blaming the person behind it.

My issue is that most gun supporters also happen to be more likely to also be the same people who are all for banning RU486 (the day after drug), banning gay marriage  banning software (like Napster) and a litany of other things that fall under the umbrella of personal responsibility. Take the case of the morning after pill. If you truly believe that guns don’t kill people then neither do pills. Personal responsibility would dictate that you instead focus solely on the pregnant mother to make your case. 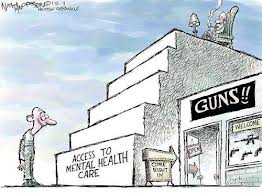 The same is true for gay marriage. Gay marriage should be legal and your job, as a detractor, should be to appeal to the person engaging in it. Perhaps you can convince them that it’s matter of personal responsibility to not marry another man (or not be gay in the first place). Anything legal is an overreach if we’re to believe your conviction on this guns perspective.

The second issue is that I’m not really calling for a ban on guns. I’m not blind. If I could snap my fingers and make every gun vanish, I would. I can’t make that a reality and I think we’ve already lost the battle for my lifetime.

However, what could have an immediate effect would be—of all things—universal access to comprehensive mental healthcare. You see, while guns may not kill people, crazy people don’t quite seem to be all that capable in the personal responsibility area. Reaching these people with help is critical.

In the current case it’s a bit more complex. Adam Lanza could have gotten all the help he needed but somehow didn’t get it. However, many of the more recent lunatics that have been running around assassinating innocent victims could very likely have benefited from direct psychological intervention and prevention.

Is it too early to ask the question of whether it’s time to consider providing universal mental healthcare? Can it really be so costly that we wouldn’t consider footing the bill if it could possibly save us from even a few of these tragedies? Some lost their jobs and snapped, others couldn’t handle life in one way, shape or form and felt like they had nowhere to turn.