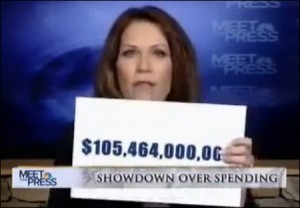 In a video statement lasting a bit over 2 minutes Bachmann suggests that the bill for “Obamacare” contained $105 billion in funding that no one knew about.

She goes on stating, “This is legislative fraud that’s been perpetrated by the president, Speaker Pelosi, and by Harry Reid. It’s an outrage and we demand an answer from Nancy Pelosi.”

I think Pelosi’s response should be, “Are you telling us that after all this time of your endless fighting against this bill that you’ve now found someone who may have actually read the details of some of it?”

A bill that contains details of funding for the subject of the bill? Say it isn’t so! How dare this bill have the temerity to provide for itself. I’ve never heard of such a thing.

I can’t believe this woman has taken the time to prepare and film a statement that tells everyone she doesn’t even know the details of the very things she’s so fervent about. What’s next—a statement about how she’s discovered she’s a member of Congress?