Walt Wawra, a police officer from Kalamazoo Michigan, went on a trip to Calgary in nearby Canada. The trip took he and his wife to a park where, in the middle of broad daylight, they were accosted by two men and the harrowing experience nearly cost them their lives. Lucky to have escaped, Walt wrote about the altercation to the Calgary Herald newspaper and his letter was published soon thereafter.

In it, Wawra starts the letter right off by saying it feels strange not carrying his off-duty handgun. He noted the right to protect yourself and how that need arose in an Aurora, Colorado theater. He then described the life-threatening ordeal. “Two young men approached my wife and me. The men stepped in front of us, then said in a very aggressive tone: ‘Been to the Stampede yet?’” The Stampede is a local, multi-day event a bit like Mardi Gras.

When Wawra ignored the two men they again demanded to know if he and his wife had been to the event. Wawra sprung into action. “I quickly moved between these two and my wife, replying, ‘Gentle-men, I have no need to talk with you, goodbye.’ They looked bewildered, and we then walked past them.” 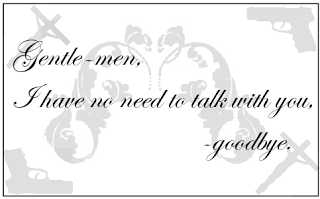 Wawra was certain the two did not have good intentions that day. He then concluded, “Would we not expect a uniformed officer to pull his or her weapon to intercede in a life-or-death encounter to protect self, or another? Why then should the expectation be lower for a citizen of Canada or a visitor? Wait, I know – it’s because in Canada, only the criminals and the police carry handguns.”

Read the letter yourself as it’s quite an experience. My first thought was that this was nothing more than a hoax. However, other sources have since followed-up and spoken directly with Wawra who defends writing the letter.

Canadians were so shocked by the perspective that they started a Twitter thread and it went viral. One of my favorite responses was this one, “My boss saw me in the hall & asked how my project was going. I speculate she did not have good intentions so I walked on.”

The part that really resonated with me is that I engage people like this all the time and it’s a desirable asset but nothing I want to risk getting shot over. Virtually anyone in sales is risking their lives in this sort of environment. Of course I wasn’t there so I can’t be entirely sure about the full array of variables involved here but I find it very hard to construct any example where the phrase “Been to the Stampede yet?” can be constructed to be menacing.

Okay, so this is one crazy person but this is a cop of 20 years in this country and this sort of “confrontation” caused him alarm? I know several people personally who would react with the same level of fear and each of them carry guns. These two guys may have had a bit to drink but strangers engaging us is not a cause for alarm. If we reach a time where we all feel such concern then we’ve lost whatever chance we have as a people. Imagine women having this feeling any time a man approaches her to ask about a date. You’re already risking sexual harassment if you engage someone at work. Now if you do it outside of work you might scare someone—or worse.

Do you want a sobering thought to end this piece? Mr. Wawra is home now and walking the streets with his wife and gun.