I’ve decide that Democrats should take the high ground on the health care reform bill and agree to repeal several elements of it. 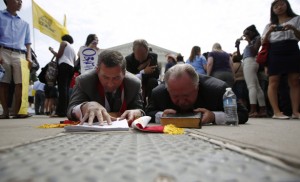 The Dems should hold a major press conference and announce that they’re dropping all of the following items from the bill to address the most grievous complaints of Americans:

1. The death panels just have to go. They’re just too complicated and with Boomers making up a huge chunk of the population it’s just too much damned work right now. We have bigger things to focus on, though it could mean more jobs at the Gulag ovens.

2. Coverage for illegal aliens should be dropped immediately. Being on the run keeps these people fit enough, so they really shouldn’t need the coverage anyway.

3. The socialized aspects have to be dropped. All the bits about the government-owned doctors, hospitals, and insurance plans must be stripped. You know as well as I do that the moment the government gets started hiring doctors, that they’ll get them all from ACORN, and then you’ll be asked to be part of a community organizing effort every time you get a cold.

4. The entire section about government-funded abortions has to go. You just know, that if this section stays, it’ll lead to abortion parties and who wants to attend those? I’ve already been to enough parties that felt like an abortion. Actually going to a real one would just be too much. Plus I’d never know quite what to bring.

While they’re still riding that high we tell the lot of them that that’s all they have to do in 2012 to get their candidate elected President.