As I’ve mentioned previously many conservatives believe that the Democratic party is the party of hate. Specifically they feel that any conservative woman in politics is hated by the left. Take the case of Sarah Palin. All we hear from Sean Hannity and the other pundits is that everyone on the left fears her and hates her for all that she represents and has accomplished. 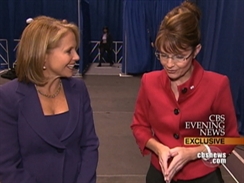 This is utter nonsense of course. I interact with a lot of different people in my daily life and the majority of them are liberals. Until this past Wednesday I’d yet to run into anyone that stated (let alone truly felt) that they hated Palin. I’ve not seen any sort of poll that reports the results of the question, “How do you feel about Sarah Palin?” I’ve seen her approval ratings but those don’t have a breakdown for those who say they disapprove of her, and thus, identifying to what degree that disapproval goes. I also have no doubt in my mind that, if such a poll were taken, very few liberals would actually say they hate her.

So why then do the conservative pundits keep hammering away on telling their listeners, viewers and readers that liberals hate conservative women politicians and, specifically, Sarah Palin?

Quite simple actually. It’s all part of what they view as the ultimate mechanic for controlling any political concept. It’s the Karl Rove plan. All anyone has to do is listen to any of the conservative punditry for a bit and you’ll realize that they view Rove as the ultimate political seer—and for good reason. His ability to transform the message is legendary. For example, in a 1994 judicial race in Alabama, Rove showed just how powerful his approach can be. Rove’s client, Harold See, was running against the incumbent Democratic Judge Mark Kennedy. Kennedy was a pillar of the community and was a major force in causes surrounding abused children. His own campaign materials, of course, pointed out all of this work. His reputation seemed unimpeachable.

Rove’s most classic approach involves taking the most positive aspect of any opponent and turning it upside down. Rove had his people start a whisper campaign that Kennedy might not have embarked on all these endeavors for purely altruistic reasons. They suggested that he, in all this work with children, might just be a little too close to them. Could it be that perhaps he was really a homosexual pedophile? The smear nearly cost Kennedy the election in one of Rove’s rare defeats. Kennedy did win but only by a single point in a race that had looked like a runaway landslide at the outset.

Recall also this same tactic with respect to the 2004 Presidential race with John Kerry. One of Kerry’s biggest assets, especially in a time of war, was his decorated service record. How better to not only negate it but to turn it to your advantage by suggesting he wasn’t a hero at all, but was instead a coward, traitor and liar.

Now think about this with respect to Palin. What’s the left’s biggest asset against her? It’s that whenever she’s asked just about anything the answers are either nonsensical or entirely devoid of any merit. How do you turn that into a positive? You do it by suggesting that just asking any questions and questioning the answers given is, in and of itself, proof of deep-seated hatred.

Katie Couric asked Sarah Palin what she reads in the now infamous interview. Palin blew this simple exchange. She didn’t have an answer. Conservatives should have realized what a mistake had been made with her selection but were so vested in the process that they just couldn’t do that. Instead Couric is now vilified by conservative punditry (and, as a result, conservatives) as a villain. How dare she ask that question. The only reason to ask it is that she must, like all liberals, hate conservative women like Sarah Palin.

The same thing is going on of late with Carrie Prejean. Here we have a woman whose chosen profession is to be a beauty pageant contestant. Everything about that world is artificial. The smiles are fake. The teeth are unnaturally white. The breasts are augmented. Clothing is glued in spots to appear just so. Their commentary is also fake.

Have you ever noticed that when sports athletes are asked questions that 95% of them give non-answers? It’s because that’s their job. Being controversial isn’t part of the job. Beauty queens aren’t asked questions in an attempt to gain some new previously unrealized solution to the world’s problems. They’re asked these questions to see if they’re practiced enough to give a flawless, well-scripted answer. Carrie Prejean failed miserably in that regard. She was asked a tough question and it was so tough it took her off-script and she gave an off-the-cuff response. That’s great in just about any social venue but not in the middle of a beauty pageant.

Prejean is proving during her 15 minutes of fame to be a stereotypical contestant. She’s great to look at but don’t expect her to be building rockets in her back yard. Instead of just accepting this conservatives have decided to make her an example by taking issue with the question itself. The thinking is that Perez Hilton (I still don’t know who this guy is) just hates conservative women (did she have “conservative” tattooed on her somewhere?) and wouldn’t have asked this question if he didn’t. Any liberal who questions Prejean also is guilty of just hating conservative women. Now that apparently includes push-over Larry King for his interview of her where asking the most basic questions resulted in her telling him that he was being “inappropriate”.

It is, of course, all rubbish that just keeps Rove smiling.