Last night on The Daily Show Jon Stewart‘s interview segment was with noted conservative author Ken Blackwell. Blackwell was there, quite amazingly and to his credit, to promote his book, Blueprint: Obama’s Plan to Subvert the Constitution and Build an Imperial Presidency.

The segment that aired to the TV viewers was almost unremarkable. However, Stewart often runs his interviews for as long as they can go and posts them in their entirety on his website. It’s the extended version of the interview that is entirely noteworthy. 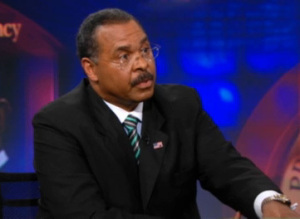 Blackwell has been a frequent guest on all the conservative shows, as you can no doubt imagine, given the tenor of the book. He’s presented as a scholar of the political landscape and one who has been, ahem, fair and balanced on the issue. Of course just about everyone else not already drunk on the Kool-Aid knows this isn’t the case given just the title of the book in question.

Stewart seemed, at the outset of the show last night, to be just as surprised that Blackwell would choose to come on the show as the viewers clearly were. The entire interview represents a classic dichotomy of the current political divide. Blackwell tosses out one talking point after another without any supporting evidence. At the start of the interview he responds to Stewart’s concern that few in the studio are likely to find common ground by stating, “But you love liberty” suggesting President Barack Obama is taking it away.

Not once in the entire process does Blackwell manage to make any one of his points stick. In fact, he just keeps returning, time and again, to the same vanilla message of Obama’s desire to create a more centralized government. When he does try to go into details Stewart immediately points out that the facts don’t support the conclusions reached to which Blackwell’s only response is to say that Stewart’s facts aren’t correct even though Stewart makes it clear much of them have come from the non-partisan FactCheck.org.

That a well-informed comedian can so easily undress a supposed expert on the issue with such complete dominance is exactly my issue with the Right on most of their positions today. They simply do not stand up to virtually any realistic scrutiny. Once you get past the choir there’s no one else out there that hears the hallelujahs.

It’s incredible viewing that everyone should check out and if anyone watches this and thinks Blackwell did a good job explaining the situation then I’d like to hear the reasons why. Again, this is someone who is put up, unchallenged, as a noted expert on the full conservative circuit and in just one single interview by a comedian he’s been summarily defrocked as a fraud.

The video is in three parts and in the third part keep an eye out for the watershed moment regarding judges and appointments. Classic viewing…