So once again the entire “birther” conspiracy and fiasco is in the news. Tonight on conservative radio I had to hear about how every other President has had to prove his citizenship by producing his birth certificate. The other big item was that even John McCain had to prove his when he ran for President. 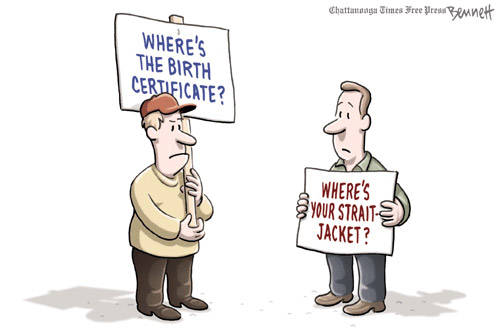 First of all, I want to see footage of past President’s showing their birth certificate to anyone. I don’t recall in my entire life, or my study of history, any President attending such an event. I’ve read nearly 2 dozen Presidential biographies and none of them ever mentioned this rather interesting event. I seriously doubt this has ever happened before.

Second, John McCain had to prove his citizenship because there was a valid complexity to his birth. He was actually born in Panama. The catch is that he was born on a United States Naval Air Station there which, we’re told, was considered United States territory. In other words, his birth actually involved a rather curious question that did need to be clarified.

Now, let’s look at President Barack Obama‘s situation. Let’s consider a few things that are not in dispute. First, he was born in 1961. Second, his parents had a home in Hawaii at the time of his birth. Third, they placed birth announcements for him in two local papers long before anyone could have possibly thought of him having any political aspirations. It’s not as if either of his parents came from politics and had this all mapped out for him from birth.

So my point is simple. I don’t care where Obama was born. The founding fathers thought it necessary, in their time, to require that the president be a natural-born citizen. If you read up on this (as I have) the founders were concerned that the President should be someone who was born of parents who are, themselves, citizens of the United States and who have raised their children as such. They wanted to avoid the potential problem of non-citizens raising their children as, for example, having allegiance to a British monarch and then becoming President.

In fact, the top historian of the Revolutionary era was a Dr. David Ramsey.
He, along with many others, stated at the time, “Citizenship, as a natural right, belongs to none but those who have been born of citizens since the 4th of July, 1776.” James Madison (a founder and President) wrote many times about this very subject stating nearly exactly what I covered above about the concern of a child of British decent being raised to be faithful to a foreign King.

The point of the requirement to be a natural-born citizen is to ensure that the prospective President was raised in an environment that was, at it’s core, faithful to the ideals of the United States. Being raised by citizens, under its culture, benefiting from its many advantages would help to guarantee that the possible future President understands the core values of this country.

Now, back to President Obama. Let’s say the birthers actually are right. Let’s say that the Obama’s went to visit his father’s family in Kenya when his wife (Obama’s mother) was far along in her pregnancy. While there she gives birth to a boy. The parents, understanding the benefits of being a US citizen, upon returning home soon thereafter, make sure to have birth announcements posted and to take Barack to the hospital to procure a certificate of live birth.

Having done my own family tree let me tell you that even in 1961 many families were still having children at home requiring them to take care of the pesky paperwork a little bit after the big moment. This might have been the case here or it might not have been (if the current record is to be believed).

However, back to the point the Tea Party patriots should be sticklers about. What was the intention of the founders? We know from history, very clearly, what they intended and why. Go look it up for yourself and you’ll find far more examples than just the two I presented here. So the Obama’s return home, with a small infant and get all the key paperwork. They then raise him from then on as a US citizen where he goes to US schools and is surrounded by US culture and ideals and experiences the American Dream.

For me, that’s a long way from say, the example of Arnold Schwarzenegger, whom many feel should be exempted from this requirement to allow him to run for President. Arnold was born in Austria and grew up there even serving in the Austrian army. He didn’t arrive here until 21 and yet I’ve heard countless conservatives, including noted pundits on Fox News, suggest openly that he should be able to run. That effort has died down a bit given his rocky final years as Governor of California where he managed to scare off a number of conservatives with some of his choices in leading the state.

Anyway, the point is that the current President, even if the birthers are right, would only have failed in the sense that, as an infant, he managed to breathe some Kenyan air for a short while and to be exposed, ever so briefly, to a Kenyan environment before spending nearly an entire life indoctrinated in the American experience.

From an argumentative position, this sounds a hell of a lot more like what the founders had in mind than even what John McCain experienced. He was born in Panama and spent more than a few days there. What’s more, and often not discussed, is that contrary to popular belief the Naval station there was not considered US territory as, at the time, we only had leasing rights to the land and not, as with our other bases and embassy’s, territorial rights and that’s a major distinction. In other words, John McCain never met the actual criteria for being President either—as it’s written.

However, my view is that McCain qualifies as he really does meet the ideal the founders intended and being the son of a career US military officer makes it rather hard to avoid the US culture even when it’s mixed with other surrounding cultures. McCain, in the end, spent most of his formative years in the US.

So if you believe John McCain qualified but Barack Obama doesn’t I have to question your motives. For me only those who are blinded by the rhetoric, too stupid to know better or simply racist could possibly have this point of view. I can only understand those who want to argue about this topic as a matter of arguing semantics with regard to the actual wording of the requirement over its intent. This is one slippery slope as I’d then want to finish that debate with a healthy one on actual wording of the second amendment over the intent many of these same people try to tell me I’m not getting. You can’t have it both ways unless, as noted, you fall into one of the tree categories above.

For me, whether Baby Obama spent his first few days in another country doesn’t matter.