I will state right off that I’m not a Rush Limbaugh fan in any way other than to credit him for becoming so successful. I’ve been aware of Limbaugh since the late 80’s. His approach has never wavered. It’s always political shock value of the highest order. For many years I believed that’s all it was—a ploy to draw ratings and nothing else. On the radio his voice has a way of suggesting sarcasm. Then came his failed TV show in the early 90’s. That’s when I decided it wasn’t a ploy—that most everything the man says is what he believes. You could see the earnestness in his body language with every utterance.

The argument many fans make for him when he gets into hot water is that we all just don’t get his unique sense of humor. Where have you heard that excuse before? It’s been used forever to try to explain away bad choices and lack of empathy. Believe me, I know from personal experience here of what I speak.

The latest self-induced dilemma he finds himself in has followed a similar path as before. He says something entirely unacceptable. People complain. He doubles-down on his comments. People complain some more. He continues to not only deny any wrong-doing but ridicules his accusers. He starts to lose advertisers which, in turn, risks the only things he cares about—money and attention and thus he then feels compelled to apologize (or is forced to apologize given the torrent of pressure against him). 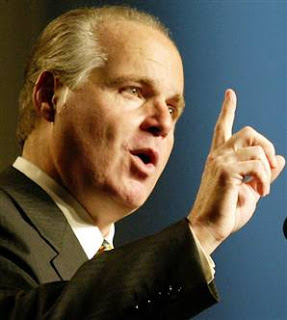 We’ve been down this path before—when he suggested, quite emphatically, that Michael J. Fox was exaggerating his Parkinson’s symptoms, his “Barack the Magic Negro” song, calling soldiers who criticized war “phony soldiers” as well as his racist comments against Philadelphia Eagles quarterback Donvan McNabb.

In this case his apology is the worst kind of apology. Even before you hear it know this—that even radio icon Don Imus (who himself was similarly disgraced for comments a few years back) called it “lame” and referred to him as an “insincere pig“. That’s saying something.

How do we know this latest apology is sincere and heartfelt? Well, because Rush tells us so in his very apology. He also said, “I always tried to maintain a very high degree of integrity and independence on this program. Nevertheless, those two words were inappropriate, they were uncalled for, they distracted from the point that I was actually trying to make, and I again sincerely apologize to Miss Fluke for using those two words to describe her. I do not think she is either of those two words.”

In response to the apology it’s target, Sandra Fluke said, “I don’t think that a statement like this issued saying that his choice of words was not the best changes anything, especially when that statement was issued when he was under significant pressure from his sponsors who have begun to pull their support from the show. This was not someone who made one accidental statement. This was three days of significant portions of his three-hour show. He insulted me and the women of Georgetown who have received no apology. He insulted us over 53 times.”

On Saturday he posted the following to his website:

“For over 20 years, I have illustrated the absurd with absurdity, three hours a day, five days a week. In this instance, I chose the wrong words in my analogy of the situation. I did not mean a personal attack on Ms. Fluke. I think it is absolutely absurd that during these very serious political times, we are discussing personal sexual recreational activities before members of Congress.

I personally do not agree that American citizens should pay for these social activities. What happened to personal responsibility and accountability? Where do we draw the line? If this is accepted as the norm, what will follow? Will we be debating if taxpayers should pay for new sneakers for all students that are interested in running to keep fit?In my monologue, I posited that it is not our business whatsoever to know what is going on in anyone’s bedroom nor do I think it is a topic that should reach a Presidential level.

My choice of words was not the best, and in the attempt to be humorous, I created a national stir. I sincerely apologize to Ms. Fluke for the insulting word choices.”

First of all, I don’t see, at all, how you can call someone a slut and a prostitute and directly refer to them while ridiculing how much sex you think they’re having and call for them to post those activities on YouTube and not mean it to be a personal attack. That’s simply ludicrous. This was not just a personal attack. This was three days of all-out assault. Second, he again shows how little he listens to anything but his own head on these things by re-stating a totally erroneous comment about taxpayers paying for this when this is about employer-based health plans that have nothing to do with our tax payments. Lastly, he suggested that he claimed it isn’t our business “whatsoever” to know what people do in their bedroom. How does he reconcile that with his calls to post such things on YouTube? It just doesn’t add up.

My problem with his apologies is that, like before, they miss the bigger point. It’s not his so-called wrong choice of words that are in question here. It’s his core values and what he believes deep down about the issue that remains the bigger problem and for this he has no apology what-so-ever. These comments were wrong on so many levels that it’s simply unacceptable thinking no matter how you try to spin it. Was it okay to call someone a slut and a prostitute because they advocate the use of birth control? No. Would it be okay to equate someone with these traits to attack someone else’s perceived political agenda? No. Would it be acceptable to do so in the name of generating higher ratings? Maybe, just maybe, in a comedy show but this is a serious political show so, no.

It, like his apology, fails every measure of explanation. Rush Limbaugh seems to have forgotten what world he lives in and believes that there’s a process to be followed when he does these things. The bigger question is how many times we’re going to let him get away with this approach. It doesn’t matter if he says what a lot of the country believes. That doesn’t make it any more right.  I’m hoping, like Glenn Beck before him, that his advertisers have finally realized what a hateful neanderthal this man is and takes away what he loves most—the money and the attention.