So in a desperate attempt to get people to consider him a viable candidate, ex-Governor Mitt Romney said today he wouldn’t cut the defense budget if he’s elected President. 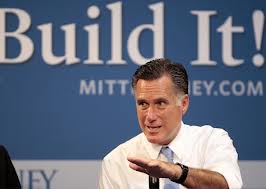 In doing so he just lost any chance he had of getting my vote—and he had a chance as I respect the guy and what he was able to do in Massachusetts. My only concern was to weigh just how much I feel his religion would drive his agenda. I was just getting comfortable with that when this gem came up.

Anyone who states, categorically, that something so absolutely core to the basic discussion of cutting spending cannot be taken seriously. Everything needs to be on the table and excluding defense is nothing more than a Hail-Mary pass to the hard right that will respond to that close-minded message.

For all we know, we could be well on our way out of combat by then and he’s still just promising that defense is off-the-table? If anything this just makes me realize how absolutely intent he is on taking the focus away from the health plan he instituted that he can’t disavow. What’s next? Is he going to shave his head and get a big Wal-Mart tattoo on top to show how corporate he is?