The GOP unveiled their version of the 1994 Contract With America and it’s a real thing of wonder at 21 pages.

The highlights all pretty much reek of hypocrisy:

They want to cut the deficit but meanwhile refuse to let the tax cuts for those making over $250,000 a year expire. This alone shows that the GOP isn’t serious about its stated goals. Let’s cut the debt while retaining an incredibly expensive debt that isn’t necessary…. Yeah, I believe your motives. 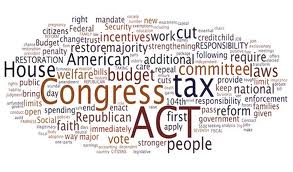 They want to freeze government hiring. Oh, except in the Pentagon and in Homeland Security which are two of the biggest run-away trains in the government. Defense spending has always been the biggest sign of the GOP being a huge poser. “We stand for smaller government”, all the while spending more and more on defense for wars few of us want and none of us need. They also specifically state they want to fully fund a missile defense program. I’m sure that’ll be handled with complete transparency and incredible attention to frugality.

They will oppose any tax on carbon fuels. Again, this stands in stark contrast the the major thrust of the message of cutting the deficits.

They want to return spending to the levels of ….. drum roll please ….. 1970? 1985? 1992? No, actually they believe spending was entirely normal in 2008. Are you kidding me? This would be like me promising to pick all the fruit off all the trees (*within reach of my arms currently). Again the transparency of this manifesto is insulting and yet I’m sure it’s going to be trumpeted loudly all over the airwaves of every conservative outlet available.

Amazingly little is mentioned of Social Security and Medicare. The GOP knows that it appeals to a large number of AARP members and there’s no way they can seriously attack those areas and expect wide support. This again speaks to the massive hypocrisy of their message.

One of the comments at the start of the document states, “An arrogant and out-of-touch government of self-appointed elites makes decisions, issues mandates, and enacts laws without accepting or requesting the input of the many.” Really? I vaguely recall an election or two a while back where more than half the electorate gave their input and ran this group out of power. I guess I was dreaming.

Frankly, if I were responsible for the Democrats I’d have them put out a document that bettered every one of the points here as the bar set with this document is so low you could clear it while rolling over in your sleep.