Last night, as the news of Osama bin Laden‘s death spread my initial thoughts of euphoria turned to the inevitable re-spinning that would no doubt go on for those who are not supporters of this administration. I knew, without any doubt, that there would be a long list of those who would see nothing but trouble with how every part of this reality took place. 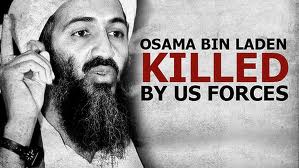 Sure enough as the day wore on today I endured radio callers who couldn’t stand the “smugness” in how President Obama was “claiming 100% credit for the results”. Then came many who were saying that Obama forgot to thank President Bush (the latter) for all his hard work on making this all possible.

I wanted, quite frankly, to vomit.

No credit should be due, what-so-ever, to our 43rd President. First and foremost it was on his watch that we were so directly and heinously attacked on 9-11 and it was that President who stated that his administration would get bin Laden “dead or alive” and it was that same President who, just six months later stated matter-of-factly, “I truly am not that concerned about him.”

Just three months after 9-11 President Bush didn’t do the job in Tora Bora.

In 2006 Bush told Fox News contributor Fred Barnes that bin Laden was, “not a top priority use of American resources.”

And just today we have more than half of the Republican candidates for President who could not even find it within them to mention Obama in their comments about the news.

Yet many are commenting that the current President failed in not mentioning the previous President in his comments. The only thanks President Obama owes President Bush with regard to this issue is in screwing up so badly that Obama has the opportunity for this moment at all.

It was Bush who’s responsible for the failures that allowed 9-11 to happen. It was Bush that didn’t close the deal in Tora Bora. It was Bush that moved to allow torture of prisoners at Guantanamo, to allow for prisoners to be renditioned away to hidden locations, to strip our Constitution to allow for policies that only drove more impressionable people to join in arms against us. President Bush failed at every single turn on this issue and deserves zero credit in the events of May 1, 2011.

House Majority Leader Eric Cantor said, incredulously, “I commend President Obama, who has followed the vigilance of President Bush in bringing bin Laden to justice.” This, in my view, calls the mental faculties or priorities of Cantor into full question. If he views what President Bush did as fitting the definition of vigilance then can we trust his instinct on anything he touches?

If, on this day of incredible news, you’re one of those that cannot find it within you to see this as good for all of us and to give credit where credit is due then you are absolutely part of the problem.