Today on the way into my office I was listening to Glenn Beck (it’s great if you think of it as a parody in an alternate universe). He spent half-an-hour going on about a report from the National Inflation Association (a group I’ve never before heard of). Their report noted that the impact of recent Fed plans to boost the economy will drive up inflation to such a degree that we’ll have bread prices of $23 and $15 for a single Hershey‘s chocolate bar.

Beck kept suggesting that this seemed logical and, for example, used his own experience with gold. He claimed that when he first started telling people to buy gold it was at $700 an ounce and now it’s over $1,400 an ounce.

First, I love that he never once bothered to mention that virtually every conservative show has been bombarded with commercials about buying gold. Perhaps that played some small part in driving up the price of gold? No….. Never. 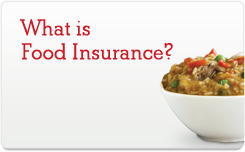 Then the real fun began. He started begging listeners to take “action”. What sort of action should you take? Well, start looking into solutions for how you might stave off this period of inflation to be able to feed your family and, of course, how better to do that than to consider the very food insurance his show (along with other conservative shows) has been hawking for months now.

What an incredible coincidence.