This morning I find a news story that caught my interest mainly because it puts forth some compelling stats that I’ve been looking at all along and that you’d get zero perspective on from conservative sources. In fact, I’m fairly certain that virtually any fan of Fox News or conservative radio will see the headline, Obama’s Jobs Record Looks A Lot Like — Ronald Reagan’s, and immediately assume it’s complete nonsense. 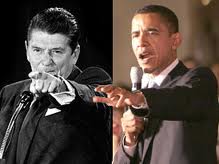 Since the Reagan mythologizing began a few years back I’ve been keeping track of the stats. As I’ve noted before, virtually none of the conservatives I speak with have any clue what Reagan’s actual record consisted of.  I can say almost anything negative—no matter how ludicrous—about Jimmy Carter and a conservative will agree with me. They know that every single thing Reagan experienced was vastly better than anything we experienced under Carter. That’s not even close to being true but that speaks to the level of propaganda that’s been going on.

The article points out just how high unemployment was at this same point in Reagan’s tenure. In fact, this is the first month where Reagan’s numbers finally dip below Barack Obama‘s numbers after their unparalleled eruption up to 10.8% in November and December of 1982. That’s when all the tax increases began to occur (after his famous tax cuts and the tanking of the markets and the economy). What followed was a nearly-as-impressive drop in unemployment and economic recovery.

I again wonder exactly just how insane the rhetoric would have been had Obama had unemployment figures as high as 10.8%. The closest he’s gotten is 10.1% and yet I’m absolutely certain that will never be the story any Fox News-er will tell.

The comparisons are really night and day. Reagan—like Obama—inherited a total mess. One of them wasn’t unemployment but there was a mess virtually everywhere else. The distinction is in what happened after they both took office. Reagan came in and started making huge changes in the tax code and began taking a machete  to everything he could get his hands on—with the exception of the Defense Department. The results were immediate and prominent. Obama’s approach was less aggressive and the results have been less prominent. Under Obama unemployment peaked a full year before it did for Reagan before it began its current molasses-like decline.

The irony of the numbers is that, contrary to Fox lure, much of the unemployment trouble stems mainly from the cutting of jobs in the government sector. There have been 1 million government sector cuts since May 2010. Obama’s private sector numbers look much better.

The economic outlook is also entirely different. Obama’s future looks nowhere near as bright as what we experienced on the dawn of Reagan’s second term. However, from their lowest points in jobs Reagan (again to this point in history) had created 2.41 million jobs. Obama has created 2.58 million. Where Obama is at a huge loss is that overall, since taking office he’s lost 1.63 million jobs. If you think that’s bad just consider that George W. Bush had lost 3.21 million. I continually remind myself that much of the same people who gave us those numbers are the ones telling us they have the answer to fix Obama’s troubles. At times like these I wish we had an immediately “Clean House” button to wipe everyone out from both sides and start over.