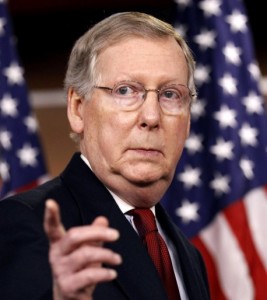 Senator Minority Leader Mitch McConnell is demanding an investigation by the FBI and the U.S. Attorney’s Office to determine if its headquarters was covertly bugged. At the center of the brouhaha is none other than actress Ashley Judd who was once considering a run for McConnell’s seat in Kentucky but who’s since decided against running. A recording of a conversation between staff strategists (including McConnell) has been released outlining the details of countering a potential Judd campaign.

The details of the conversation aren’t anything all that surprising. The staff discuss calling into question her own statements about suicidal thoughts, depression, her liberal positions on coal mining and other key issues. However, Jesse Benton, McConnell’s campaign manager made their position clear by stating, “We’ve always said the left would stop at nothing to attack Sen. McConnell, but Watergate-style tactics to bug campaign headquarters are above and beyond. Obviously a recording device of some kind was placed in Sen. McConnell’s office without consent. By whom and how that was accomplished presumably will be the subject of a criminal investigation.”

The part I find most interesting about this is the clear attempt by Benton to jump immediately to the ridiculous. We all just saw the power of personal technology and how it cost Mitt Romney dearly when a video surfaced at one of his closed events and his comments regarding the now-famous 47-percent.

Isn’t it far more likely that someone at the McConnell headquarters simply recorded the conversation with their phone and then released it to the press? Instead Mr. Benton would have us believe some covert black-ops group, or perhaps Judd herself, broke into McConnell Central and bugged the facility in the dark of night. It was somewhat telling that no mention of finding any such device was made. It’s also interesting that the GOP leader of the Senate is calling for an expensive investigation by government agencies over this. Isn’t that an outrageous use of taxpayer dollars?