Colorado Senate Republican candidate Ken Buck appeared on Meet The Press Sunday. When asked by host David Gregory to explain his views on homosexuality. The conversation went as follows:

GREGORY: Do you believe that being gay is a choice?
BUCK: I do.
GREGORY: Based on what?
BUCK: Based on what? I guess you can choose who your partner is.
GREGORY: You don’t think it’s something that’s determined at birth?
BUCK: I think that birth has an influence over it, like alcoholism and some other things, but I think that basically, you have a choice. 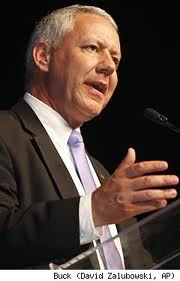 He’s correct that you can choose who your partner is but that’s about it. Do people of this convoluted mindset actually believe that you can also choose what sex you’re attracted to? I think Ken Buck would look great with Newt Gingrich and Newt could do wonders for his career so maybe Ken can just suck it up and choose Newt as his next partner (if he hasn’t parked his wagon there already of course).

Ken, come on, you know that Newt could really help you get further down the road politically and all you need to do is man up and give him a reach-around every now and… hey… nothing wrong with a little oral sex between two guys right? It’s not about sexual desire. It’s just about choice. Choose Newt and the rest will take care of itself.

How can these neanderthals not understand that the reason they’re disgusted by the thought of tossing another guy’s salad isn’t because society says it’s wrong or that their parents might not like it but that they’re just not attracted to the same sex?

Ken, you know (I assume) how you get turned on by the thought of a woman going down on you? Well guess what? That same excitement you get is exactly the same process for gay men and lesbian women when thinking about partners of the same sex. It’s not rocket science. It’s just what it is and it’s no more a choice than your choice to be a prick. You just are, all the way down to your core.