So after Michele Bachmann screwed up a key Revolutionary-era story you’d think everyone would be making sure any reference they’d make would be vetted for accuracy. Instead, yesterday we get Sarah Palin confidently telling an audience that Paul Revere road around ringing bells (?) warning the British and telling them they won’t be taking away our guns. 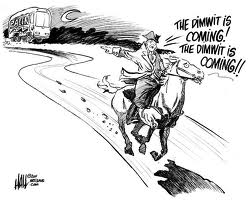 Of course the annoyance here is that these are the same people that claim to be heavy proponents of everything to do with our Founding Fathers. If they can’t get the very things they claim to be fans of correct then how can we ever expect them to know the facts on things they aren’t supposedly up-to-speed or interested in? This is just ludicrous.

Last night I’m watching Bill Maher‘s show and the panel includes a college professor, Larry King and, former Republican Congressman from New York, Rick Lazio. At one point he hearkened back to the days of Ronald Reagan and his recovery and how President Obama needed to follow more in his footsteps. The issue is that he then made a point of saying that, of course, Reagan’s deed was even more daunting because he inherited a country with unemployment that was 10 or 11%.

As I’ve pointed out before, I can say this to virtually any Republican and they’ll nod in complete agreement even though it’s totally crap. Reagan came into office with unemployment at 7.2% and then, after getting his famous tax cuts, watched unemployment climb up to 10.8% (higher than anything Obama has seen).

Much has also been made of how it’s now long past the point where you can mention the previous administration and yet Republicans are still blaming things today on every previous Democrat to hold the office. Want a more obvious example of this? People are saying Obama has failed because he’s three years into his term and unemployment is at 9.1%. If only he followed Reagan’s example. Again, as I’ve pointed out before, this is more ignorance on the right. At this point in Reagan’s term unemployment was 10.1%.

Ignorance of the most basic facts is no way to go about leading this nation out of troubled times. Simply making shit up to fit your perceptions isn’t going to help anyone. Following those who don’t have a clue and lauding them to everyone you know makes you worse than them.

Now don’t get me wrong here. I’m not saying that Democrats have the market cornered on brilliance. King and the college professor sat there and listened to Lazio (as did Maher) and none of them said a word.