Karl Rove is affectionately and pointedly referred to as “The Architect” whenever he appears on Fox News and most other outlets (though he rarely leaves the safety of Fox). 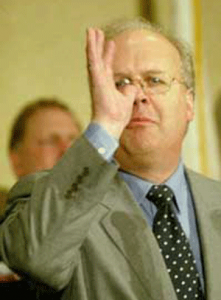 The continual fawning over this guy that’s done by virtually anyone on Fox is a complete joke. Nothing about this man is balanced. He’s treated as if he’s a completely non-partisan by-stander to all things politics when every single comment out of his mouth is calculated for maximum political effect. I have no doubt that every pundit on Fox and conservative radio knows it and plays to it purposely.

Rove has said that the divide between President Barack Obama and congressional Republicans is “a shocking failure.” He went on to say that this is Obama’s fault as he campaigned as a centrist but then moved hard to the left once he got into office. When asked if President George W. Bush did the same thing in 2000 (campaigned as a centrist but then moved to the right) Rove disagrees.

How anyone who was there can state that with a straight face is only a mystery to those not paying attention. Then Governor Bush ran as, in his own words, “a uniter”. He made a huge deal out of his “proven ability” to work with both sides of the aisle and bring everyone together for a common good. Instead, once in office none of that materialized. It ushered in the beginning of the greatest political divide we’ve ever seen. To suggest that what President Obama is experiencing is wholly of his own making exposes Rove as the charlatan that he is and always has been on these issues.

I listen to him give interviews on conservative talk shows and callers chime in afterwards at how fair he is and how non-partisan his views are. Only a zealot could listen to this guy and qualify his comments as non-partisan.

Rove has lied repeatedly about past events and continues to do so at every turn. Just recently he was on with Matt Lauer denying that he had anything to do with the Valerie Plame situation and never provided her name to anyone. Scott McClellan, Bush’s then Press Secretary went before the press on three occasions at the time to deny Rove had anything to do with it after receiving assurances directly from he and President Bush that Rove had nothing to do with it. Lauer asked Rove if he owed McClellan an apology and Rove said absolutely not. That’s interesting and telling because McClellan points out that Rove not only apologized to him for this in person but then later did so in front of the entire senior staff and later still sent a hand-written note apologizing once again.

What does it say about someone that apologizes privately to someone three times about something but then, when it matters most, refuses to do so on the record?