I’ve had it with this guy. I’m tired of people making excuses for this cheerleader who just makes up things as he goes along and then manages to get countless people to buy into his completely incorrect misinformation as fact. 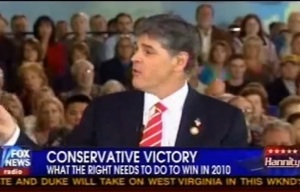 Take, for example, a single segment taken from his “Freedom Tour” on his first stop at the Reagan Library in California.

:37 “Interest rates were 21 1/2 percent” (referring to when Ronald Reagan took over as President). Interest rates were terrible during the Carter years but not as bad as Sean Hannity makes them out. He’s talking about the Prime Rate which is not what people paid for their mortgages. The average interest rate in January of 1981 was not 21.5% but 13.15%. This is a minor issue that could be corrected by simply saying “The prime rate” and not “interest rates”.

:39 “Unemployment out of control“. Yet another myth the Republican pundits want to sell everyone on. Unemployment under Jimmy Carter started at 7.2%, peaked at 7.8% and when he left office was at 7.2% so it was mainly flat. More than two years after Reagan was in office it ballooned to 10.8% and that’s been the highest mark since that time including President Obama.

:46 “And I think Reagan cut taxes. The opposite of what Obama’s doing.” In 1981 Reagan cut taxes creating then-record deficits and the economy responded by going into the toilet (the DOW alone dropped 12%). He next raised taxes, then record amounts, over 6 years which helped bring the economy back.

:50 “Reagan stood up to the evil empire.” Here he’s referring to the Soviet Union where his open diplomacy and meeting WITHOUT preconditions played a key role in forging the path to success with Russia.

:56 “Reagan ended the cold war.” The cold war didn’t end until Reagan was out of office nearly a year. It officially ended in December of 1991 three years after Reagan left office. Reagan did play a major part, but to give him sole credit is an overstatement of major proportions.

:58 “….created, didn’t save, created 21 million new jobs.” Only Republican-sourced outlets credit Reagan with creating 21 million jobs. I firmly believe this is a classic example of repeating the lie until it takes hold. The Wall Street Journal, and every other legitimate news source, notes that Reagan created 16 million jobs. That’s a great number, but Hannity finds it necessary to bump it up another 5 million (I believe to make it look better against Bill Clinton‘s numbers which he never inflates over the WSJ numbers).

It just goes on like this for the entire segment and that’s the Hannity way…. More lies for those who can’t be bothered to check any facts.