Every Democrat running for office early next month should be going out of their way to highlight a story out of Tennessee as their rallying cry against the tide of positive sentiment towards Republican rule.

While listening to Glenn Beck this morning a caller mentioned this story—which I initially missed—and Beck ridiculed the caller while supporting the actions of the town. 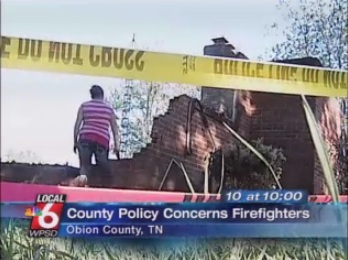 The story is a simple one. A family in Obion County Tennessee pleaded with firefighters to put out the fire at their home but they refused to do so as recently the county had instituted a new fee of $75 to protect your property from fire by the fire department. The family hadn’t paid (they claimed they forgot) and when firefighters showed up they made sure the neighbor’s property was protected but simply watched as the first home burned to the ground along with killing the family’s three dogs and a cat.

Beck’s view of this was as incredulous as it was ludicrous—This is how community in America is supposed to work. The community—knowing its own concerns—determined that this fee was needed and voted to add it. Thus it’s a just choice. However, what would be wrong, in Beck’s view, would be for the Federal government to step in and force the county to provide that protection.

In Beck’s view things should always be local. Local he defines as the community, the township, the county and the state. He kept saying to the caller, “Can you tell me anything about that community?” In other words, since you don’t know anything about it then you have no right to comment just as the Fed’s should have no right.

Nice line-drawing there. By his own logic I should be able to have a vote, in my home, and decide that it’s legal on my property to run a brothel. My family voted on it and it was close but we won so the people in my house decided to have a brothel there. If the neighbors can’t tell me what the pattern on my dishes is then they have no right to speak up as they clearly have no clue about my very local community.

We can play that game all day long. You cannot just arbitrarily draw a line where you just happen to no longer like what’s on the other side of it.

But back to the main story. This is exactly the kind of callousness that the Right stands for in my view. Imagine a doctor, upon encountering a person choking on food, refusing to help that individual out because his records say he didn’t pay some fee to the township. No fireman should have to be put in this sort of situation.

As I said, if I were Democrat running for office next month I’d be running commercials and asking about this hypocrisy. The Republicans are for less taxes except where they aren’t and when they aren’t then you run the risk of losing your home to fire while they stand by and watch. The images of the house burning to the ground strike me as just as potent as any Willie Horton ad.