Much has been made of the last few years about patriotism and the Pledge of Allegiance that many recite to our flag.

I’ve always found it quite humorous that the loudest proponents of the pledge seem to be entirely devoid of any actual knowledge of its history.

Today its biggest supporters are very much out of the Tea Party mold—ardent supporters of our Founding Fathers (or so they claim) and the tenets they built the country on.

So, what’s so humorous about their fanatical approach to our pledge?

1. The first surprise is that it was written in 1892. In other words, this integral part of patriotism had absolutely nothing to do with the origins of our nation. Not a single founder lived anywhere near long enough to encounter it.

2. It was initially only recited by school children on Columbus Day. 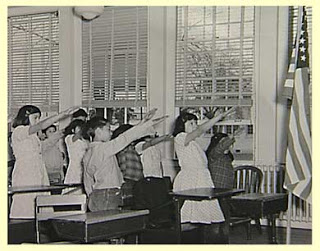 3. The original pledge included a salute that, as you can see in the picture, became a bit problematic—so much so that Franklin Roosevelt had it changed to the hand-over-heart gesture we know today.

4. The pledge was only selected as our official national pledge in June, 1942.

5. The pledge was written by one Francis Bellamy. Today’s pledge zealots would be shocked to find out that Bellamy was a socialist. In fact, he originally planned to include the words “equality” and “fraternity” but didn’t. Why? Was it because he worried about their socialist overtones? Not exactly. He said he dropped their inclusion because the state superintendents of education on his committee were against equal rights for women and African Americans.

6. The religious aspect of the phrase “under God” was only added to it in 1954 during the hyper-sensitive cold war battle against the so-called godless Communists. That only happened after several previous failed attempts.

7. The Columbus Day events that brought the pledge to prominence were conceived as a means to sell flags and magazines (where the pledge first appeared) to public schools and their students. So much for its patriotic origins. However, this does make it rather capitalistic.