The revisionism of history that goes on with respect to Ronald Reagan is a disservice to both the populace at large and the man himself. The unveiling of a statue of Reagan at the capital proved yet another opportunity for people like Fox News host and radio personality Sean Hannity, among others on the right, to peddle their misinformation about President Reagan and his policies. 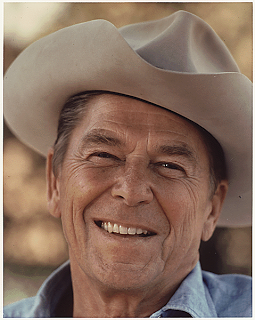 I lived through his administrations and voted for him in my first Presidential election. I remember his tenure well. Hannity has talked about President Barack Obama‘s need to “follow the Reagan model” as if it were a flawless plan for a presidency. Regardless of your views, like all Presidents, Reagan wasn’t perfect.

Don’t get me wrong — President Reagan deserves credit for many things. Chief among them is giving the country back the sense of confidence that began eroding with the scandals of the Richard Nixon administration.

Another major positive is that human rights, prior to his tenure, was seen entirely as a liberal issue. His efforts, though rife with hypocrisy at the time, transformed this from a partisan issue into a nearly-universal bi-partisan one.

His oratory skills were simply amazing. His speech to the nation after the Challenger disaster is something every citizen should strive to see (scholars consider it one of the 10 best American speeches of the 20th century).

However, Reagan wasn’t responsible for many things attributed to him by misguided pundits. Reagan, for example, grew up in a time when immigration was considered a hallmark of American values. In one of the only examples where he even commented on it he told an audience of naturalizing immigrants that immigrants “enlivened the national life with new ideas and new blood,” and “enrich us” with “a delightful diversity.” This is also a President who signed a bill giving amnesty to 2.7 million illegal aliens. 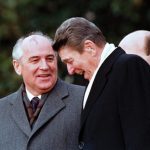 Another inconvenient hypocrisy involves condemning any President for considering the option of meeting leaders of enemy states without pre-conditions. The Reagan model would dictate exactly this course. If Reagan had insisted on such pre-conditions we’d have never gotten anywhere with the Soviet Union. Reagan reached out, openly, without pre-conditions (to the complete shock and disgust of most of his own party leadership) to Soviet leader Leonid Brezhnev just after taking office in 1981. This didn’t go anywhere as Brezhnev was on his deathbed at the time. He then did the same thing with both his successors, Yuri Andropov and Konstantin Chernenko, but both men died not long after assuming power. It was no surprise that he did exactly the same thing when Mikhail Gorbachev finally took control. He sent a personal letter to Gorbachev that was hand-delivered by then Vice President George H. W. Bush. The letter included an open invitation to a summit. It represented the first major step toward finally bringing an end to the Cold War.

Some other tidbits that Americans who didn’t live through the Reagan years should know about “the Reagan model” as it existed — not as it is being re-envisioned:

And this is hardly a comprehensive list of the things Reagan did that fly in the face of the rhetoric being put forth on Fox News these days. I didn’t even go into Iran-Contra—his biggest scandal. Remember also the next time Sean Hannity goes on about Reagan and his “greatest era of prosperity” this Wall Street Journal report on job creation. It says that Reagan created 16 million jobs (not 21 million as Hannity purports) while President Clinton created 23.1 million. George W. Bush? 3 million. Hannity punching bag, Jimmy Carter, created 10.5 million in just a single term.

One of the biggest canards is Reagan’s trickle down economics (which he borrowed from 1920’s Republicans, and we know how that worked out), also known as supply-side economics or Reaganomics. His own budget director stated that it was nothing but rhetoric and “was always a Trojan horse to bring down the top rate.” There is no evidence anywhere to show that giving the rich more tax breaks results in a better economy for all.

(A note about sources used in this entry: I have provided links for sources where possible but those source links are anything but exhaustive. For simplicity sake I have mainly included only a single source for readability purposes. In some cases Wikipedia is used but the information there is referenced simply as convenience as the information is readily available on other sources whose links tend to change. Virtually all of the entries start from my direct memory and were checked across several sources.)