The disaster in the gulf oil leak is an absolutely perfect example of everything that’s wrong with the viewpoint of those that unfettered capitalism is the best path.

Yes, the government is doing a horrible job of addressing the situation and yes, I suspect we’ll find that they failed more than once with regard to safety regulations being enforced and other similar safeguards. The latter is the excuse being offered on Rush Limbaugh‘s show this morning by a guest host. That’s a joke. To point to a failure of the government here when you’re primary view is that they shouldn’t be involved in this from the start is sheer folly. 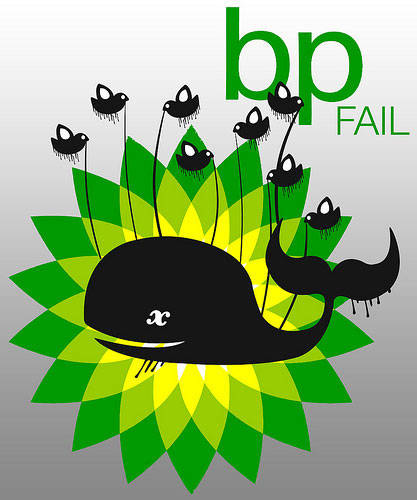 The government does a poor job of enforcement but at least their intention is good. Where is the good intention in how BP is handling all this and has handled it from the start? The protection of their profits is all I’ve seen at every turn from this company in every recounting of the facts.

I’m not calling for the abolition of petroleum. We need it. I am, however, pointing out that this is a clear and painful hint at what the world would be like if the government were entirely outside the equation. Again, the United States spent most of its existence exactly the way the hard Right anti-government wonks think it should be now and the results were draconian. It took the government to bring an end to slavery, unacceptable child labor practices, sweat shops, the robber barons, corporate blight and to enact civil rights and equal rights for women.

The idea that the market is self-correcting is a false view. Consumers, surrounded by oil derricks, will not stop buying oil. They’ll just adapt to this slow change as if it’s the new norm without any sense of a real alternative. It takes an impartial entity to make the harder choice and force these corporations to think about a bigger picture. The problem with our government today is that it’s simply no longer impartial enough.

Chris Matthews was so incensed about the current situation that he called for President Barack Obama to nationalize the oil industry to deal with this. I think that’s going too far but it’s not too hard to comprehend how he got to that point. BP would be risking executives getting executed if this happened in China.

The pundits on the right are now so busy wanting to destroy Obama that they’ve once again sold their credibility in order to point out how badly he’s botched a response they don’t even think is necessary!