I’m continually astounded by the sheer number of areas where Republicans claim to be supporters of the Constitution and the concept of capitalism along with being dead-set against other concepts like socialism or nationalism, only to then go down a path that clearly stands in sharp contrast to all those stated concerns.

During the administration of George W. Bush the party was mainly responsible for giving up several key protections that were once untouchable. It was done in typical fashion by playing the fear card. Fear of terrorism got the Right to toss away freedoms like they were rotting produce. Rampant wire tapping, renditions, acceptance of torture, willingness to jail citizens without due process, etc. Oh, yes, all of these back-pedals came with an explanation but that’s not the point. The point is that you cannot claim to be for something while proactively working to disassemble it at the same time.

The latest example is in the rhetoric involving gas prices and how to fight them. As has been pointed out, the Right has done a complete about-face on this entire issue for the sake of the common goal of hating everything that comes out of President Obama‘s mouth. When Bush was in office everyone on the Right made it clear that the President really can’t do much of anything to impact gas prices. Those prices, they said almost in complete unity, were dictated by global market issues and the impact of speculators. Now that Obama’s in office suddenly they’ve forgotten they ever said any of it, and now it’s all Obama’s fault. One losing candidate from 2008, George Allen of Virginia (he of Macaca slur fame), has released a “gas calculator” to show you how much you’d have paid for the gas you just bought under Bush.

Bill O’Reilly went on record in 2008 to remind the right that the President really can’t do anything about gas prices. In his Talking Points Memo segment he said, “So the next time you hear a politician say he or she will bring down oil prices real quick understand it’s complete B.S.” In a telling prediction that shows no one pays attention to such things Bill went on to tell people to sell their SUV’s and claimed that if we all used less gas, prices would drop. Where’s the fault there? We just finished one of the warmest winters on record, and used less gas, but look where prices are. It’s not because of Obama. It’s because of globalization. Our oil industry sold the excess gas overseas (which is, by the way, a position he now agrees with). 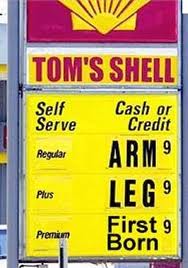 Last night on Fox‘s Hannity show, Sean Hannity interviewed the aforementioned George Allen and showed the gas calculator but then launched into another entirely faux attack on President Obama. By the way, here’s another example of the dishonesty of Sean Hannity. Take a look at the transcript. In it Obama states, “We have been drilling. We are drilling right now. Under my administration, America is producing more oil today than at any time in the last eight years.”

Hannity’s response to this was, “Now, there was a study, Congressional research service, which by the way is nonpartisan. They came out. He is bragging about we increased drilling. No, 96 percent of the total increase of domestic production has occurred on nonfederal land. The number of leases and permits have been cut in half and more. So, he is being dishonest there.”

No, he’s not being dishonest there. Only Hannity is. What the President said is entirely, 100% correct and the very study Hannity sites points that out. The President speaks for America. He’s not saying he and Joe Biden are out there drilling. He’s not saying the Federal government is doing more drilling. He’s saying that, now, while he’s in office, America is drilling more than in the last 8 years and that’s borne out by the study. It doesn’t matter that 96 percent of the increase comes from the private market. The fact doesn’t change because of this. Is Obama trying to take credit? Maybe, but that’s another issue and not one being debated by Hannity in this piece.

In his next segment Hannity had Stuart Varney on to talk about oil and the effect of speculation. They talked about a very interesting bill being put forth by Senator Bernie Sanders. That bill would limit speculation to serious speculators and, it’s believed, would reduce prices. Varney at least suggested that he felt the bill would stabilize pricing and reduce the spikes which would be a huge improvement. However, it was the next part of their discussion that I found most interesting, and it’s something I’ve seen repeated by Republican pundits for weeks now. The refrain is that American oil companies are taking our oil and selling it overseas because that’s where they can get a better price for it. The thought is to force oil companies to keep the oil here for our consumption.

I get that. We love consuming everything we can. It’s what we, as Americans, do best quite frankly. However, think about this. What Republicans are suggesting now is that we essentially nationalize American oil companies and force them to only sell their product here because, well, because we want it. Capitalism be damned.

These people scare me. At least I know where the Left stands. The Right doesn’t seem to have a clue about anything they claim to stand for.